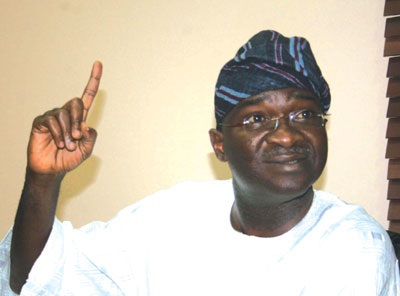 Governor Babtunde Fashola has become a symbol of progressivism, a can do
spirit that has lighted the light of hope, industry and commitment in
Lagos State and beyond. History and experience have proven to Nigerians
that days of possibilities are not part and parcel of Nigeria’s
political-geographical entity but Governor Fashola has given lagosians in
particular and Nigerians in general a new sense of hope that we can still
dream and that dream can become a reality. For with effort and hardwork
rooted in patriotism and love of humanity our nation can still grow with
help of great and progressive leaders of Fashola’s caliber. The age of
Fashola has become the age of possibilities, making Nigerians believe once
again that we can work together, dream together and grow together when we
set our mind to accomplish great tasks.

The good work, can-do spirit and vision of Governor Fashola of Lagos state
has been noticed, celebrated and recognized beyond the borders of Nigeria.
In the article at http://thenigeria.com written by Dr. Robin Renée
Sanders, former U.S. Ambassador to Nigeria from 2007-2010 she wrote:

“I had the honor of personally co-hosting a luncheon on May 16, 2011 for
the newly re-elected governor of Lagos State, Babatunde Fashola (SAN) at
the Army-Navy Club in Washington, D.C. in conjunction with the
Constituency for Africa — one of the leading U.S. advocacy organization
focused on Africa. As I introduced the governor, I underscored the
extraordinary commitment, dedication and vision of this extraordinary
leader. The luncheon event was attended by 50 key civil society, academic
and private sector representatives interested in hearing the Governor’s
vision for one of Nigeria’s most important states — Lagos — where the
capital city of the same name (Lagos) heralds a population of 18 million.”

Governor Fashola great achievement in Lagos State speaks for itself and
this can become a case study for our governors and leaders to dissect,
analyse and learn from. For instead of inviting foreign dignitaries for
the governors’ retreat they should invited one of their own and he will
tell them about development and urban planning in Nigeria using Lagos
state as a case study.

It can be easy for few cynical Nigerians to minimize his momentous
achievements by saying that lagos state has a large tax base to raise fund
for development. But that particular point of view no matter how appealing
and convincing it appears to be,is not really rooted in factuality neither
it is necessarily the case. For beyond having a large tax base, the
revenue collection entity must be reformed and organized to make it
functional and efficient. Lagos city being one of the largest urban cities
in the world requires strategic planning and pro-active psychology to make
the management intrinsic and fundamentally plausible. The accomplishment
of formulating and channeling these building blocks are the strength of
Governor Fashola administration.

The point must be made also that Lagos state has always have a good
fortune of having action governors but Governor Fashola has taken it to a
zenith, a level above and beyond.

It is important in our blossoming and nascent democratic dispensation to
acknowledge a citizen and a leader who has show commitment and big
momentum drive in doing the work of the people with best of his knowledge
and effort. Nigerians should try to honor and give due respect to a great
son of Nigeria Governor Fashola who has dedicated himself in rendering the
best service to his constituent and voters of lagos state that has chosen
him as their number one citizen.

The task ahead for the governor is still a lot but his track record has
shown so far that he is a man of great discipline that has the gift of
putting things in order with a golden touch. One great example of his
great work in lagos is not just building highways to decongest lekki
troubling ‘go-slow’ or the beautification of streets and roads of lagos
with beautiful arts and paintings but what he did with his explemary works
in so many places including the former rowdy and boisterous Oshodi Bus
Stop which he converted into a beauty by setting up a recreational park.

Bravo! Governor Babtunde Fashola is surely a man with great vision and
imagination. Keep up the good work.