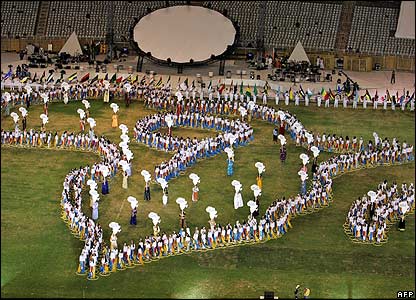 By Arigbabuwo Ademola
Yesterday, July 10, Ghana finaly and effectively dented Nigerias hope of
playing at the All African Games in Maputo, Mozambique.

Earlier, the Black Princess of Ghana edged out the Super Falcons to
book the tickets to the event ahead of them.

Now the Black Meteors of Ghana has beaten the Dream team Five of
Nigeria which means Nigeria ‘The Giant of Africa’ wont be
participating in any football even at the All African Games.

After wining 3-1 in Benin, the Dream team five looked good to qualify
and reterliate on behalf of the Super Falcons but where trashed and
did Nigeria a double blow.

In the buildup to the game, it was reported that the Nigerian team
were ‘badly treated’ in Ghana. It was reported that substandard
facilities were given to them and on saturday, 9 June, their training
session ended with atacks from Ghanian fans.
Kudos to Ghana if thats a tactics because it was grievously felt as
they came out victorious at the end.After 90mins, the Black Meteors
won two-nil without a single reply from the Dream team. Scoring one
goal each in either halves.

On two fronts, Ghana has proven to be a better team than Nigeria. Male
and Female Football.The Bragging right has be lost

What Next? Is Austin Eaguavon getting it right? Where Is Nigeria
Football Heading to.