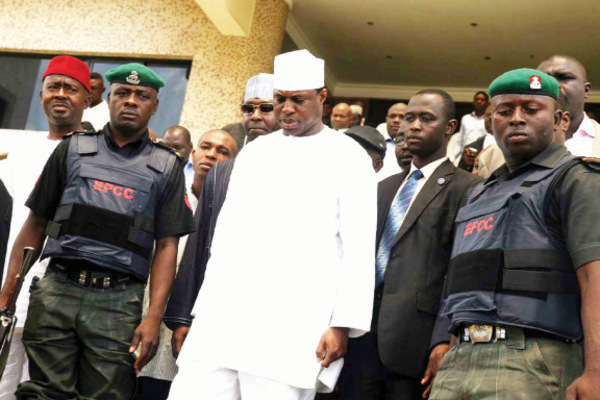 The Economic and Financial Crimes Commission (EFCC) yesterday said there are enough evidence in the Proof of Evidence linking former Speaker of the House of Representatives, Dimeji Bankole, with the offences of criminal breach of trust and stealing.

Mr Festus Keyamo, counsel to the commission, made this charge in his reply to Mr Bankole’s application to quash the charges against him.

In his application to quash the charges of illegally obtaining a N38 billion loan leveled against him before an Abuja High Court, Mr Bankole, through his lawyer, Adegboyega Awomolo, said there was no shred of evidence to sustain the 17-count charge.

Subsequently, Mr Bankole asked for an order quashing the charges against him because “the Economic and Financial Crimes Commission (EFCC) has neither statutory nor constitutional power to issue authority to a private prosecutor, to prosecute offences created by or under the Penal Code Act in any court of law, without the fiat of the attorney general of the federation first being sought and obtained, and usage of the powers as a vindictive weapon against the applicant.”

Citing the provisions of the Legislative Houses (Powers and Privileges) Act and the National Assembly Service Commission Act, Mr Bankole also said no court has jurisdiction to try or subject him to jurisdiction in all matters which are related to, connected with, or arose from any exercise of his official functions.

The former Speaker also claimed that there is no evidence leading to the conclusion that he breached the provisions of Section 311 of the Penal Code Act Cap. 532, Laws of the Federation of Nigeria (Abuja) 1990 in the manner alleged in counts 7, 8, 9, 10 and 11 of the charge or at all.

He is also asking for an order condemning the EFCC for an abuse of court process, malicious and reckless use of prosecutorial power of the attorney general of the federation when it had no power or authority to appropriate such powers.

The commission, however, submitted that the question as to whether the Accused/Applicant acted dishonestly can easily be ascertained by his conduct. It also states that other argument as to separating the person of the Accused/Applicant from his position cannot hold water because in cases of corporate fraud, the directing minds of the corporate body shall be held criminally liable for deliberate infractions of the law. This was also laid to rest in Bode George’s case.

Mr Keyamo also said now the Accused/Applicant has left office as Speaker of the House of Representatives, the government will have to pay the loan. The commission, therefore, urged the court to dismiss the preliminary objection of Mr Bankole and allow the prosecution to prove its case.

The case comes up on July 19th at an Abuja High Court, before Sulieman Belgore.