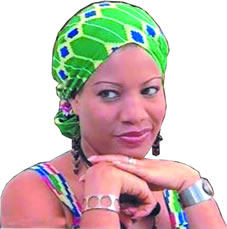 What was the feeling when your daughter had her first tooth and uttered the first word?

She had her first tooth pretty late; I think she was about nine months and her first word was ‘Daddy’ when she was about six months old. She just said, ‘Da da’ out of the blues… It’s too hurtful when you know that after carrying a child for nine months the first thing that comes out of her mouth is ‘Daddy’. I was very angry. I am with her 98 percent of the time, yet she only remembered to call her daddy first.

What makes you happy whenever you look at your child?

When you are not working for Glo, acting or even writing, what do you do in your spare time?

I am often relaxed and I watch television a lot. I just stay with my child because she is my joy. I don’t have a man; so, she is everything to me.

Most women are used to calling honey to come and fix the car when it breaks down somewhere. But how do you manage?

Well, for me, there is no honey to call. What I do is just service the car when necessary and make sure it is in perfect working condition. Since I know that no one else is there to do that for me, I have to assume both the role of a man and woman to get things done for myself. Because there is money, I really don’t struggle so hard to get things done. However, I have got good friends like Zik Zulu who comes once in a while to check on us; and sometimes, when my car is at the Nissan shop, he gives me his car and driver to help me around. I also have some caring friends who try to be of help when it is most needed. I have got my uncle, Mr. Cool, and some male friends who assist me.

You are doing well for yourself now. Do you think your freedom has allowed you to be more focused on your life goals?

Well, I would say it was because I was in a wrong marriage. One can still achieve all this, even if one is married. There are some married people who are doing good things, but mine was a wrong marriage. It could be probably because I was in a very, very insecure union called marriage. Everything was scripted; everything was just not right. Yeah, I have the freedom and I’m really fulfilled. But I have to curtail this freedom. I tell myself every time that because I am free doesn’t mean I shouldn’t just let go. Sometimes, I get so excited that I really want to go crazy, but I always caution myself and that is what makes me a woman and not a man. Men are free to do whatever they want, but should a woman try to exercise her freedom, she is seen as a whore in this country. So, you have to have self-control.