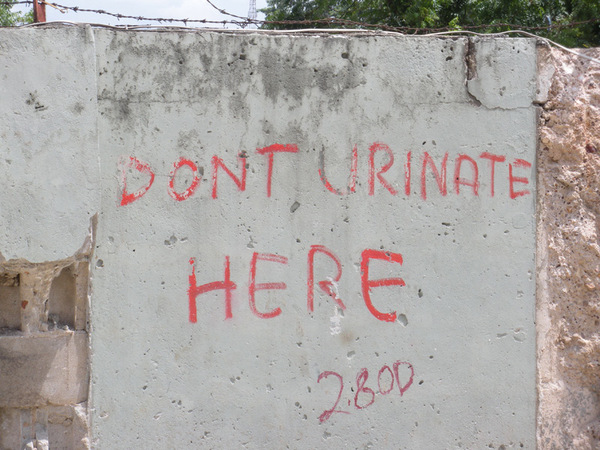 If you live in Lagos, take a moment, just one moment and think. Ask yourself what the two most common inscriptions you see on the walls of buildings and fences in Lagos are? It’s not a difficult question just think a little…

In the U.S. the most common and popularly known number code is 911. True to its over flogged use in action and horror movies, the number code 911 is entrenched in the hearts and heads of everyone in America; boy or girl, citizen or foreigner, resident or tourist. 911 is the number to call for security, fire, accidents or health related emergency services. The rewards of calling the number when appropriate may be the preservation of several lives and failure to do so can lead to disaster.

As a child growing up in Naija, Lagos precisely, I quickly learnt my country’s variation of 911. In comparison the two numbers somewhat remind me of Batman and Joker; their only similarity being their popularity amongst native residents. The number 419 is a number code to mean dupe, trickery, scam; in more accurate words it refers to advance-fee fraud. It’s a term so commonly used that Nigerians have conjugated it hence the secondary terms 419er and 419ed. Derived from the article of the Nigerian Criminal Code (part of Chapter 38) the popularity of the number code makes it the subject of the text often seen on walls in Lagos:

In Lagos, it’s safe to say that a plate number is as common to a vehicle as “beware of 419” is to an uncompleted building”.

However, there remains another text which happens to be the true subject of my discussion today. This text is arguably more popular and more commonly seen in Lagos than the former since there is no discrimination or preference towards where the text should be placed as the act it prohibits can be committed practically anywhere. I’m talking about the text:

More times than I can recollect I have seen people pee in gutters, on walls, in bushes, underneath cars, on rail ways, by road bends, on car tyres, through the open slots placed in the lids used to cover gutters, on dustbins and refuse dumps… One of the most unforgettable of such instances is the account related to me by an eye witness. He said sometime in 2006 while on his way to Yaba, along Empire near Ilekpo bus stop (as it is popularly called) somewhere close to the Ransom Kuti school he saw a man standing on the pavement that demarcated the two lanes of the major road. The man had the audacity to bring out his manhood and spray high quality premium brine on the moving cars that were headed towards Yaba. The event caused a bit of commotion because many cars swerved to avoid the stream of deadly lethal liquid fire.

Perhaps if examined under the conventions of a more civilised society such an individual would be deemed mad but in Lagos I find his actions insufficient premise to label him as insane since things like that happen every so often. I’ve seen men pee in gutters facing the roads leaving their instruments of mass disturbance sticking out for every passer-by to see. So common is the bane that people have places of preference and specialized methods of doing these things while some would rather stand, others prefer to stoop, some prefer large areas that give them room for a long and wide range of fire such as bushes and big gutters while other prefer small precise targets like drainage holes and pot-holes. My greatest grievance about this issue is the involvement of women in these shameless acts. Men are often said to have no shame and waste no time try to deny the statement but one would expect that women who take pride in their privacy would have no involvement in such acts, this is however not at all the case. Severally I have sighted women publicly perform such acts, to be fair, I must say that unlike the male-folk who constantly prove that they have no shame whatsoever when they do it on the major road and in gutters facing the streets, the women seem to prefer the backside of vehicles especially big vehicles and often subscribe to what I call the One-Leg-Up style.

So what’s the solution? How do we fight these indecent acts when people do these things even in front of walls where the text: DON’T URINATE HERE are boldly written? Perhaps we should blame the Government for not providing outhouses and public toilets? Perhaps it’s lack of education? Maybe it’s just poverty or bad mentality? I’m not sure, but I have a solution to proffer and it’s been used with much success on smaller scales. I suggest that rather than beat, fine or arrest offenders, the Government should assign to every local government Native doctors (yes! Native doctors) whose sole responsibility will be to collect available samples of the urine and excreta of people who deface the streets and public places with their waste products. Like I said people have successfully used or alluded to the use of similar methods by replacing texts like – DON’T URINATE HERE with PLEASE URINATE HERE, YOUR PEE IS NEEDED. I think my suggested method would go a long way in curbing these practices. What do you think?