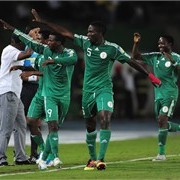 Nigeria were at it again as they demolished Crotia to ease through to
the knockout stages of the FIFA U-20 WORLD CUP in Colombia.
After a very well matched first half, Nigeria went on to lead 2-1. The
second half was also very tight but thanks to substitute Uche Nwofor
who bagged a double in quick succession to put the game beyond the
reach of the Croats when it stood at 3-2.
Olarenwaju Kayode opened the scoring after collecting a neat pass from
Abdul Ajagun. The second goal of the game was a powerful
30-yard-strike from Terna Suswan.
Croatia then pulled a goal back three minutes before halftime with a
free-kick from Zvonko Pamic, headed in by Ivan Lendric.
Just after the hour mark, Nigeria scored their third which come from
striker Ahmed Musa.
Croatia,again pulled a goal back with just the same pattern as their
first. A set-piece from Pamic was headed home this time by Andrej
Kramaric.
Nigeria then replyed almost immidiately with two goal from Uche Nwofor
to put the game at rest.
With Ten Goals from just two games, the Nigerian team is looking very tough.
Up Next is a Clash with Saudi Arabia on August 6 to decide who heads the group.
Wishing them all the best.
By