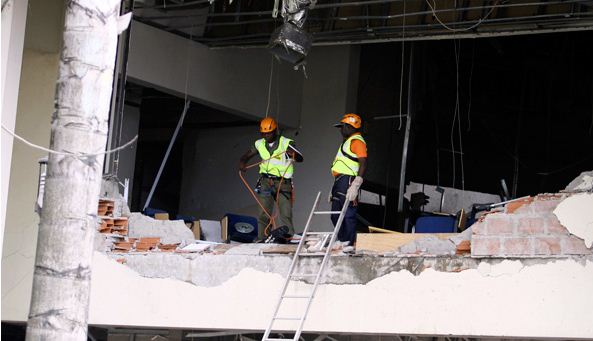 A suicide bomb blast which might be regarded as the ugliest and most disdainful attack in the face of the international community in recent times was carried out today as the UN building in Abuja was attacked. About 18 persons were killed in the attack which was carried out at about 11:00am on Friday, 26th August 2011. The attack was executed by an unidentified suicide bomber who rammed a car laden with explosives into the lobby of the three-storey United.

About 70 people were taken to the hospital, while 62 of them are alive, about 24 are injured and 5 are under intensive care. A Norwegian woman 30 years of age, was killed in the explosion.

The UN building that was attacked is in the same neighbourhood as the United States Embassy and various other diplomatic missions in Area 1, Abuja. The suicide bomber was said to have received clearance through the first and second gates and then went straight to the UN building which houses over 400 staff and headed for the lobby where he detonated the explosives.

The BBC (British Broadcasting Corporation) reported that a UN official said the Abuja office had recently received a threat of an attack by outlawed Islamic sect, Boko Haram. The official said as a result, security had been enhanced at all UN facilities across Nigeria. The police anti-bomb squad, Nigeria Security and Civil Defence Corps, Federal Fire Service, Nigerian Air Force, Nigerian Army, FCT Administration and emergency rescue workers from NEMA and the Red Cross responded immediately and rushed to the scene as soon as possible. They swiftly embarked on the evacuation of the entire building.