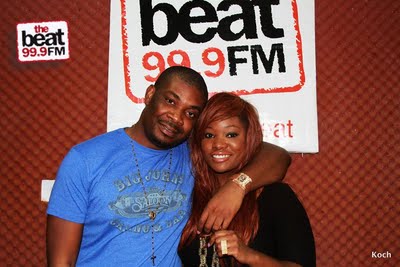 Don Jazzy was interviewed for the first time in five years by Toolz of  The Beat 99.9FM.

In the interview he talks about his upcoming book, Kanye West, Wizkid and Women.

How did you come up with the ‘Oliver’ song?
I was upset at some point when people were saying that D’banj and Wande Coal have slowed down in their career. I still want more for them.

Some ladies were mentioned on D’banj’s new song ‘Oliver’, who are they?
Genevieve, Beyonce and Omotola.

You have over 100,000 thousand followers and you don’t want to throw a party?
I’m not sure about that now.

Where did music start for you?
I started music in the church. In the choir at some point… (Pauses) you know what? I don’t want to spill everything yet. I’ll be writing an autobiography, my dad and I are working on it. There’s no name for it yet but he has called it ‘The Making of a Don’.

When will the book be coming out?
It’s coming out next year.

Let’s talk about ‘Enigma’. You asked rappers to record their song versions and submit to you…
It was crazy. I was expecting to see about a hundred responses but I ended up seeing 2000.

Talking about the ‘Oliver’ dance competition, who are the judges?
For now, apart from myself, there are no other judges.

When is the closing date?
It’s been crazy though. I will give out a 3-day notice to when it will close.

So let’s move away from D’banj for a while. What are the other Mo’Hits members up to?
Well, Wande Coal has been recording in the studio and will be dropping a fewsongs this year. We are all concentrating on D’banj for now though. When his (D’banj) album drops, there’ll be time for the others. Dr. SID is performing in different states and has also started to learn music production, he isn’t doing badly too. D’Prince’s album has been completed since God knows when. We will be releasing it at the right time.

How do you deal with negative comments?
Just like the way Jesus handled them, like Jay-Z handles them, like Kanye, likeBeyonce. The thing is that I get more love than hate, so when the negative ones come in, I try to find out why they do that. I block some (followers on Twitter) when I feel they have nothing to say.

Tell us more about D’banj’s album; will it still be titled ‘Mr. Endowed’?
A couple of tracks have been recorded. You can take the previously released singles as mixtape materials. The timing is what is most important. The album name ‘Mr. Endowed’ might change. It has to do with what comes up from now till then. Everybody should please be patient. I know you are all excited.

You were recently nominated at The Headies 2011 in the ‘Producer of The Year’ category alongside Cobhams, Samklef, Jesse Jagz and J Sleek, how do you feel?
Was I nominated? I didn’t know. Thank you so much. I’m honoured. Really,Cobhams and I shouldn’t be nominated. I like Samklef and wish he wins, everybody please vote for Samklef.

Who do you think is the next big thing in the music industry?
Wizkid.

But Wizkid has emerged already and even has an album, who else do you think is the next big thing?
For now, nobody.

So whose music do you listen to nowadays?
I listen to almost everybody, Wizkid, 2face – I can kill for him, Choc Boyz.

What about the Female artistes?
Tiwa savage is good and she has given out so much. Waje is a heavenly singer.

Tell us about working with Kanye West.
I’m very picky with music but Kanye is worse. At times I regret I played ‘Scapegoat’ and ‘Give it to me’ for him because he keeps referring to them when I make beats for him (Laughs). He likes ‘Entertainer’ too.

How about Jay Z, have you done any work for him?
Well, Jay Z recorded on a couple of beats that didn’t make the ‘Watch The Throne’ album but I’m glad ‘Lift off’ did. Over 70 songs were recorded for that album, ‘Lift off’ had been done a long time ago.

Have you done any solo production for Jay Z?
No, not yet.

When will you produce for Beyonce, when will she say ‘It’s Don Jazzy again’?
Beyonce will say it soon. Kanye West has already said it a couple of times.

Which other artistes have you done tracks for in the US?
I don’t want to talk about songs I’ve produced that have not been released because they might never be released and Nigerians will then think I’ve been lying.

What Nigerian influence have you taken over to New York?
Well I’ve taught Kanye how to eat pounded yam but he hates pepper.

Apart from making music, what other businesses do you run?
I’m into real estate and of course the Koko enterprises.

Don Jazzy, you have been seen on several occasions to be wearing T-shirts and pyjamas trousers, just like you are wearing now. What’s with the new look?
Well, I heard a story about a guy in Enugu who people used to call Don Jazzy because he dressed like me – you know wearing the Indian-overall gowns I used to put on. He also carried a walking stick like I used to. Apparently he got broke along the line but still wanted to keep up with the trend so he was caught stealing and was eventually burnt alive. That’s why I now wear what I have on. Besides they are more comfortable. I prefer to call them colourful trousers.

Tell us about Kanye West’s birthday, did you guys attend?
Well you know D’banj’s birthday is a day after Kanye’s. We travelled to New York, gave him his gift and left.

Will you marry anyone in the music industry?
Sure, why not? Of course! We will both understand that we have to work and travel, at least it won’t be one-sided.
Are you dating anyone at the moment?
Presently, no.

What’s your idea of an ideal woman?
Presently I don’t have any but I like any kind of person.

What do you have to say to upcoming acts out there?
Put God first! Do not wish anybody bad for any reason. Decide what to do before you get into it.