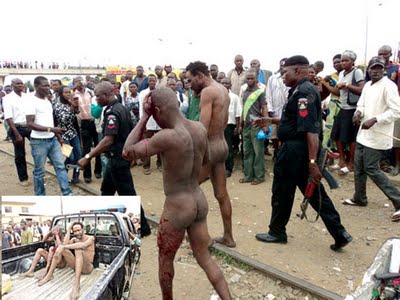 There was drama yesterday when an angry mob stripped naked two men, Alaba Abiodun and Samuel, who were allegedly eating human flesh,but they were lucky as the timely arrival of policemen who saved them from being set ablaze.

This is how PM news reported the incident:

Earlier, a passer-by along the rail line in Ikeja saw three men in tattered dresses. One of them was making a call and one eating a meat suspected to be human flesh.

The passer-by raised an alarm that attracted the mob which instantly pounced on the two suspect human part eaters. But the one making the phone call managed to escape.

Their problem was compounded when the mob moved to their hideout behind the Ikeja Local Government Secretariat fence and found a cutlass, knife, charms and meat with fat which the mob suspected to be human flesh.

When a detachment of policemen from Area ‘F’ arrived the scene, Abiodun told them, that he was a carpenter but had no money to set up a workshop.

Abiodun claimed to be from Akiniku in Moloney area of Ilaro, Yewa, Ogun State, Southwest Nigeria. He added that he made the hideout his residence as he could not afford to rent a room for himself.

He explained that the meat discovered in their hideout was a cow fat which they eat and not human parts.

After intensive questioning, the policemen were convinced that the suspects were mistaken for human parts eaters and sellers by the mob. They were later released.

Speaking with P.M.NEWS on the incident, a police officer who preferred anonymity advised the public to investigate suspected criminals before taking any action.

But for the timely intervention of the policemen, the officer noted, the suspects would have been set ablaze.