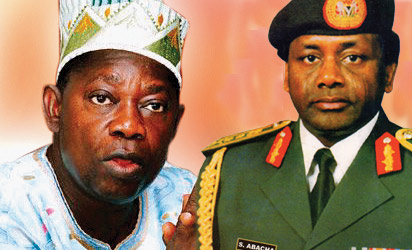 Former Chief Security Officer to the late Head of State, General Sani Abacha, Major Hamza Al-Mustapha, who has been on trial for over 12 years, said he was being kept behind bars is standing trial for the death of the late Alhaja Kudirat Abiola because the authorities against whom he has incriminating evidence (both audio and video) of how the late Head of State, Gen. Sani Abacha and the late Moshood M.K.O Abiola were allegedly murdered.

He said: “My incarceration was as a result of a script written and acted out by former Head of State, General Abubakar to further keep me in prison.

“First were the events that happened after the murder of General Abacha and late Chief MKO Abiola and for fear that I may divulge information that led to their death, they had to keep me in prison.”

He further told the court: “There is documentary evidence to show that shortly after the death of late Abiola, the then Head of State (allegedly) ordered that various sums of money be withdrawn from the Central Bank of Nigeria.”
He told the court that $200 million, £75 million and N500 million were allegedly withdrawn from the CBN to appease South West leaders and douse tension that arose after the death of Abiola.