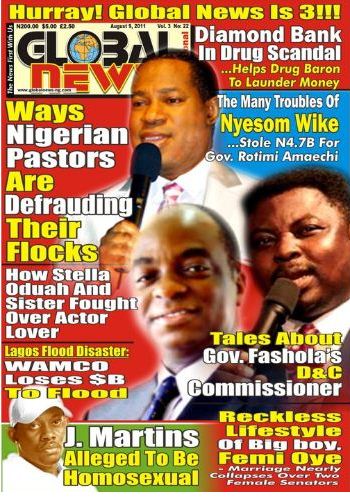 In an Interview with the Encomium magazine, popular Nigerian musician Jay Martins responded to the recent rumors about him being gay. He said

“I was in Abuja when I started receiving calls about the story and I was asked to buy the paper. I bought the paper and in black and white, they wrote that J. Martins is a homosexual. I started laughing and then entered my hotel room. I was naked looking at myself in the mirror, maybe I could see where the homo is. Me? Homosexual? From where? How? (laughs). It was very funny to me, you know it’s one of the things you face as an entertainer.

This kind of thing comes up when some people have issues with you. Let me give you an example. Some people wanted us to perform in another country and they reached an agreement with my then manager. The guy said he was sending someone with the money to our house since they could not do the money transfer. When the man came, he was trying to get someone that could help him on how the money would get to J. Martins manager and a journalist offered to assist.

When the journalist came to my house, he didn’t meet my manager but met me, and don’t forget he had been communicating with my manager and not me and I didn’t know him. He came with his two friends and I entertained them. He handed the envelop that contained the money to me asking that I should give it to my manager. I collected it and kept it for him, but the journalist left and took offence because I didn’t give him money from the envelope.

How do you expect me to do that when the envelope belongs to the management. If he has asked me personally, I would have given him money from my own pocket. So because I didn’t give him transport fare he decided to punish me by writing rubbish about me in the papers. Because of how much? The only thing I always say is that because you have pen and paper and use it to rubbish somebody’s name, don’t forget that you can’t stay there forever.”

In a different interview with Showtime Celebrity, when asked how come no one has ever connected him with a lady and whether or not he loves ladies he said:

If I don’t love ladies, who am I going to love? I’m a straight guy. Have a steady relationship and it can never be with a guy. The relationship is more than three years now. She’s a medical doctor.