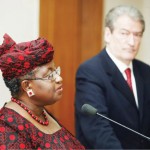 The President has threatened sack any one (of the other ministers) who fails to cooperate with the new finance minister Okonjo-Iweala. Behind a closed door meeting that was attended by Olusegun Aganga (the Minister of Trade and Investment) and the Governor of the Central Bank of Nigeria, Mallam Lamido Sanusi. The President revealed that his tenure was based on economic development, making Okonjo-Iweala, a key piece to the success of his Government. As a result the President has made her the coordinating minister i.e. “de facto prime minister” in his cabinet.

A Presidency source said according to the President, Okonjo-Iweala’s position was strategic, but could not be interpreted to mean that ministers would be reporting to her. Jonathan was said to have made it clear that project executions by ministries must be brought to her attention since it was her ministry that would release appropriated funds for the projects. Stressing that the success of his tenure is linked to the economic development, Jonathan threatened that any one who would try to stir up any trouble would not be tolerated and consequently would be sacked.

He said, “The duty of the Minister of Finance, making her the coordinating minister, is to ensure that the various ministries work together and there is a synergy in government operations.

“If everything ends with finance, it basically means that, every other ministry would have to have a robust relationship with that ministry. The emphasis is really on this synergy.”