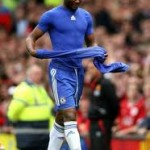 The Obi family came out on Friday to debunk claims by the media that their father’s kidnappers had contacted them and had demanded a N20 million ransom. Addressing journalists at the Rayfield residence of the Obi, Elder Mike Obi, Christopher, his wife Rose and elder brother to Mikel, Tony insisted that nobody has made contact with them and that they were not aware of the demand for any ransom.

Mrs Obi said. “We have not had any contact with anyone since he got missing to suggest that we are preparing for any negotiation. So we were surprised to watch on television and read on newspapers that a N20-N50 million ransom has been placed on his head”. This statement was corroborated by Mikel’s elder brother Tony Obi and his uncle Mr. Christopher Obi who expressed concern over the situation and pleaded with those holding him to release him.

Mikel is said to be so pained by his father’s disappearance that he has stopped communication with the family (temporarily).