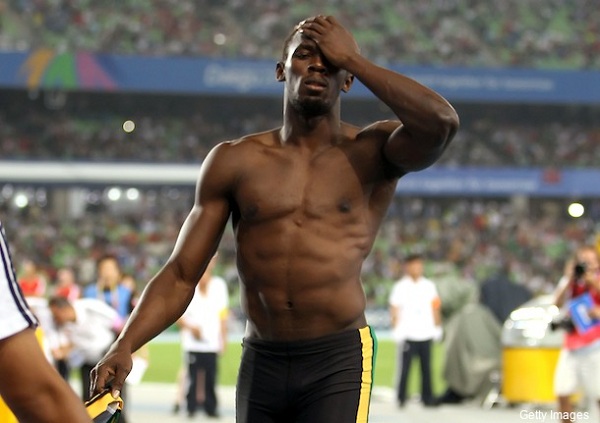 Usain Bolt had another stunning performance in the world championships. This time, it didn’t involve him crossing the finish line in the fastest time ever recorded.
The world’s fastest man broke out of the starting block early in Sunday’s 100 meter final in South Korea and was disqualified from the race, providing an abrupt end to the dominance he’s maintained in track’s biggest event since the Beijing Olympics.

An angry Bolt refused to talk about the disqualification with reporters. “Looking for tears?” he said to a group of them following him around the track. “Not going to happen.”
In 2008, Bolt broke the world record in the 100 three months before the Beijing Olympics. At that year’s Summer Games, the brash Jamaican became the star of the second week, crushing competitors and showboating down the track during dominant performances. At the 2009 world championships in Berlin, Bolt ran what was considered a perfect race. His 9.58 still stands as the world record and likely won’t be challenged until the lead-up to London.
At that time, a new false start rule may be on the books. A minor uproar ensued after Bolt’s DQ on Sunday and could lead to changes in track’s awful false start rule. The “one and done” rule has been on the books since 2010 and has led to a number of high-profile athletes getting kicked out of races before they begin. (Runners used to get two false starts. In 2003, the rule was changed to assign the first false start to the entire field.) The rule is made for television and fans, neither of whom, it is thought, want to see countless false starts and the delays that accompany them. That may be true. But what fans really don’t want to see is a 100-meter final without Usain Bolt.
Imagine the marquee event of the London Olympics, a matchup between Asafa Powell, Tyson Gay and Usain Bolt, ruined by a false start. It’s a disaster scenario for track & field, a sport that thrives on star power more than any other at the Olympics. The IAAF has to ask itself whether it’s worth running the risk of seeing a race without Usain just to prevent a two-minute false start delay. Granted, going back to the old rules wouldn’t assure a clean start by any of the three. It would, however, diminish the possibility of another fiasco in London.