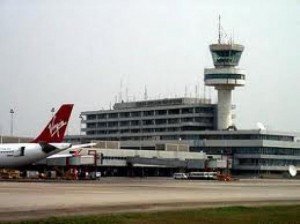 Security was beefed up yesterday at the Murtala Mohammed International Airport, Lagos, following a tip off that the Boko Haram sect may strike at the airport any moment.

Motorists and airport users trying to gain access to the international wing of the airport were thrown to harrowing experiences as a combined team of Air Force, police, State Security Services and Aviation Security frisked every vehicle that comes in while users were equally seriously checked by the security operatives. Our correspondent observed that the two entrances to the terminal building were manned by stern looking security officers who were either in mufti or service clothes.

The frisking of motorists and users led to a very heavy traffic at the airport while some passengers were apprehensive that they may miss their flight if it persisted. Some wore sober look as they tried to gain entrance into the terminal for their flights. As at the time of filing in this report, the searching of motorists, passengers and other users still continued while a source confided in our correspondent that the team had to carry out the operations following a rumour that the airport would be attacked on Thursday. It would be recalled that the Federal Airports Authority of Nigeria in conjunction with other security agencies at the airport had devised many means to improve security at the airport.

National Mirror reported exclusively two weeks ago that users were regularly screened outside the terminal before they gain access to the airport proper while those who have no tangible reasons to be at the airport were regularly turned back by the security personnel. However, those who eventually gained access to the terminal building were also randomly interrogated by the combined team of security operatives like the Nigeria Police Force, State Security Services, Immigration, Customs, Civil Defence and the in-house aviation security of FAAN. Our correspondent had observed that the combined security team was stationed at strategic places within the terminal building especially at the stair case areas.