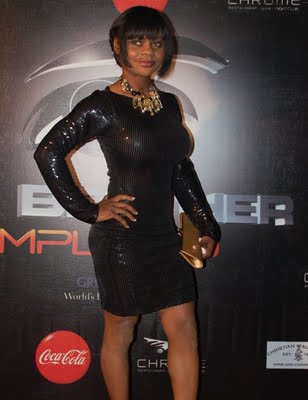 In a recent interview with the Nigeriafilms crew, Nigeria’s Big Brother Africa winner, Karen Igho, known for her delectable, spontaneous and endearing personality spoke about herself, experiences at the BBA and her experiences afterwards. Excerpts :-

It feels good to know that people actually love you, talking about the audience, Nigeria and the people of Africa. I feel honoured and great.

Did you ever think you would win it?

No. I was just thinking of minding my business and they called my name. I was so surprised and shocked. It still feels like a dream to me. Maybe by the time I wake up from this dream, it would be like five years later.

So, do you know what you would you do with the money now?

I don’t know. I wasn’t even thinking I want this money or that it would fall on my laps. And it fell. So, I’m still in shock. But, I’m still saying that whatever I’m going to do with it is going to be positive. I need to relax, think properly, to know what I want.

Your mother seems to be your number one role model?

Tell us about her.

During one of your chat room sessions, you talked about never meeting your dad. How does it feel like never knowing your dad and how did it mould you into who you are today?

It made me strong, brave and courageous. God has a purpose for me. Something has to happen for another thing to happen, isn’t it? So knowing my dad wasn’t the end of the world. It means I have a story to tell, which was telling my story in the chat room for Africa to hear. And at the end of the day, I just knew my dad like in the few last days before he died, when I went to live with him. A week after, he died. So you see where the bad luck is coming from. It really is nothing at the end of the day because I feel God already has and still has a plan for me.

Tell us about Zeus, was that a strategy or you really felt something for him?

You know me. I’m a kind of person that doesn’t pretend. When I like a guy I like a guy. And if I want to keep you as a friend, I keep you as a friend. For me, Zeus is a very smart, intelligent young man. And you know, I had this side of me people didn’t see; the part of me that is smart. Because I don’t go about saying I’m smart, I don’t do that. So when Zeus came, I was Head of House (HoH) that week and he brought my smart side out, which I am very grateful for. I actually mellowed down and saw things differently. There are many sides to Karen. There is the loud, quiet, soft, sweet Karen, so many. So he brought that side of me out. He was the one guy I connected with among all the guys. But we couldn’t go further because he had a girlfriend. We just ended up being friends.

If the situation were different, would you have loved to go out with him?

What about your relationship with Vina?

Yeah, Vina is a nice girl, initially though, she was doing gra-gra, then later she calmed down. But she’s fun to be with.

You and Luclay were quite close?

Yeah, Luclay and I were like brother and sister. But, I didn’t understand Luclay because he’s an actor. And after what he did to Lotus when she slapped him. When we had a fight, I was thinking of pushing myself into slapping him too and they evict me. After what he did trying to pull my pants down, knowing that I had never had shower naked in the house, I want to show Africa what? You know, I felt I should not be happy, so I just took a step back on our friendship. We’re still friends now and have forgotten about what happened. But, on that show, I didn’t know if it was really him. I even told him that I didn’t know who he was anymore. But, we’re cool now, just keeping it real.

So, who would you say were your best friends in the house?

Mumba (and) Baby P because I saw myself in them. Like Baby P, she’s been bullied a lot when she was young. I was bullied a lot in primary school, in my life and everything. And, Mumba comes up she’s been through hardship, just like I have. She’s done farming, lived in the village as well. Things were not all rosy for them. So I relate with them.

I don’t know. But, at the end of the day, I moved to the UK because I was dating this guy at that time, we were dating and before you know, we travelled to the UK and I said I wanted to stay here and work and school as well. I studied Business Administration from Southwark College and did some jobs in the UK. I worked in a restaurant; also in a charity organisation called Outroot – they help deaf and dumb kids – where we go out to different parts of London to convince people why they should donate money to the kids to get them hearing aids and sign language stuff. I just found jobs here and there, you know how London is, nothing is permanent. And I was schooling at the same time (full-time). I tried to do my own business twice because that was what I studied, like selling things I bought from the UK.

There is this other part of Karen people have talked about?

Yeah, I let it out the way it is, regardless of who you are. I went to that show with no strategy. I went there to be myself; me being myself, meaning, you’re going to fight, quarrel… and when you do that, that’s life, you do that with family, friends and loved ones, and when you do that, you settle. I also don’t know how to pretend, I’m not a hypocrite. If I’m upset, I let you know that I’m upset. And if you want to come at me, I give (it back to you). You know, I went through that house because I was misunderstood. At the end, they understood me. Africa understood me, saw me, as a star girl who has been through a lot in life and all she needed was love. They saw that and related with me. I’m not all that bad. Africa proved that by giving me this money, because they felt I had a good heart.

You met Denrele in 2007 at his birthday party and he encouraged you to enter for BBA show…?

Yeah, he got me the BBA form, filled it for me because my handwriting was ugly. And he told me to go for the audition, I asked him what should I wear and he said, ‘wear six inch heel and miniskirts’, I said God forbid, for where? He said, ‘so you stand out’. I said no o. You know that day I was wearing tracksuit and I went there, all through the stages, then travelled back to the UK. There, they called me back to come to South Africa, that I had made it to Big Brother. I went to the last audition and they told me to pack my bags and come. Ninety-one days later, I’m sitting here with the money. Thanks to whom? The Almighty God, Africa and Nigeria. Denrele is my close friend and like a brother.

BBA said you were unemployed before entering the house?

Yeah, because I left my job and had no job to go back to, so I was unemployed.

So, are we going to see you probably in Nollywood, music… what are you going to be doing after Big Brother?

With due respect, you never mentioned it, but the story goes. Did you really work as a stripper in the UK?

You know, when people first see me, because I’ve done bikini and lingerie model. You know, just like I get love, I get hate. And people who hate me would do anything to bring me down. Not everybody can like me so; the ones who don’t like me would want to twist the story. Of course, I’m sexy, of course, I got a boobs job. But do you know why all those things happened? People want to go about twisting their own stories but at the end of the day, I just want people to be true to themselves, not carrying stories that are not true. Strip clubbing? I never went to the strip club for one day. Why should I work there when I have the opportunity to work and get paid properly? If I had worked as a stripper, why didn’t I bath naked in the Big Brother house?

In the case of the boobs job, some people don’t believe your story that you did it to remove lumps on your breast?

You know, people would want to believe what they want to believe. But, at the end of the day, it’s me telling you my story. I don’t think people have any right to go your line when you don’t know the person and you didn’t go through the process. You have to be in my shoes. For you to judge me, you need to walk a mile in my shoes. To be honest, there’s nothing to lie about. At the end of the day, it’s my body. I just want to make it clear that this was the reason why I did it. (Breast) lump is nothing to joke about, it could happen to anyone, wife, mum, sister. And it happened to me, and I’m saying that this is why I did it. Can’t people just respect that? What if I actually did that because I had lumps?

So you are actually saying that you did it because you had lumps?

So, what about your love life?

What are your hobbies?

I love to swim, cook, and dance. I love to travel, read. I love to play football. I love watching movies as well.