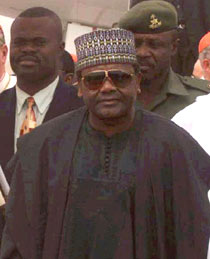 About £22.5m, which is equivalent to N5.6bn has been recovered from Jersey bank accounts in the coast of Normandy, France, the accounts were some of many in which money embezzled by the Abacha Government was deposited during the regime of the late dictator, Gen. Sani Abacha.

A delegation lead by The Attorney General of the Federation, Mohammed Bello Adoke was said to have visited the Island last month to negotiate the release of the funds, which were the proceeds of corrupt vehicle deals between Abacha and Raj Arjandas Bhojwani, an Indian businessman.

According to the Jersey Evening Post, the cash was confiscated from Bhojwani, who is serving a six-year jail sentence since 2010, for laundering $43.9m through his bank accounts in the Jersey branch of the Bank of India. The presidential spokesman, Dr. Reuben Abati, confirmed the report. He said, “Yes, I confirm it. The report is true. The money that was repatriated from Jersey is £22.5m.

The FG should also account for whatever embezzled money is recovered from bank accounts of previous leaders, else recovered money might be getting stolen all over again. what do you think?