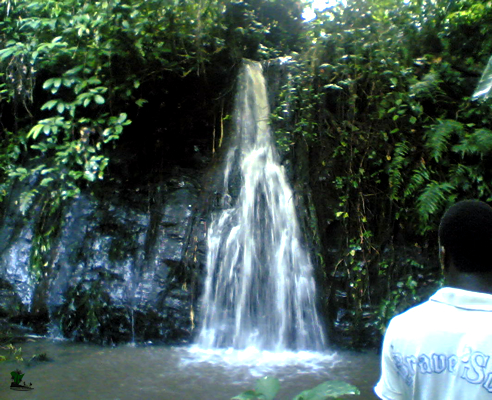 A 10m plunge of raging limpid waters was recently discovered tucked away in a remote corner of Effon Ridge near the town of Effon-Alaaye, Ekiti State.

Gracious plunge of pristine spring waters, hard to miss yet so hard to find; lost for decades, now discovered and thrown in the lime light. All known records of tourist attractions in Ekiti State and the neighbouring Osun State with which it shares boundary along the great Effon Ridge, show Arinta Waterfalls and Olumirin Waterfalls as the only falls on the ridge. It’s nonetheless awesome to note that both waterfalls have greatly enjoyed an impressive tourist traffic from all over the country.

Recently, Naijatreks conducted an exploration along some parts of the enormous ridge and discovered a beautiful waterfall located about 10km North of Effon Alaaye, languishing away in a densely forested corner of the ridge.

During the exploration, the falls was sighted from distance through the forest thickets but a major obstacle was encountered in getting to the site- a deep and flooded river. Despite this challenge, our passion pushed us beyond this limit, and all members of the team decided to roll up their jean trousers, remove their boots and step into the deep river- thanks to the help of probing sticks. Waist-deep, with ropes tied from waist to waist, we waded against the pressure of the waters till we successfully crossed the river. Locating the source of the falls proved another daunting challenge, due especially to the ruggedness of the terrain’ and this we had to let go for the main time.

We believe the height of the plunge could be a major reason why it’s not been known by many locals; this is because the sound of the cascade only gets significantly noticeable in the rainy season when the volume of the water is very high. We decided to call the falls ‘Effon Waterfall’ since it is located close to the ancient town.

We hereby call on the new government of Ekiti State to take a keen look at Effon falls as another one of the numerous potential investment opportunities the state is blessed with. We shall be very glad to work with any interested investor who sees what we see here.

Watch out for our post on ‘The wonders of Ekiti Countryside’- Coming Soon!!

Article by Folarin Kolawole of www.naijatreks.com