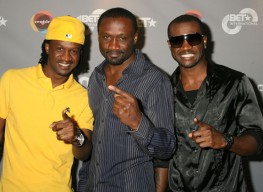 Popular hip-hop artists P-Square have been dragged to court by Benin-based music promoter, Mr. Patrick Anieze over their failure to honour a show organised by his outfit, PARUJON, in December 2009 and their refusal to refund the money he paid them. According to the promoter P-Square was contracted to perform at Naomi Garden, GRA, Benin on 26 December, 2008.

“Instead of honouring the show, PSquare left for Dualla in Cameroon and returned to Benin very late (around 10p.m.) on the agreed date. As at that time, the people had filled the venue of the show with their tickets.

“However, P-Square refused to perform that day because they were already tired from the trip and promised to reschedule the show for 14 February, 2009.

“PSquare failed to honour the rescheduled show. Thereafter, I contacted Femi Falana chambers over the failed contract. Mr. Falana personally talked with Mr. Jude Okoye, who is the elder brother and manager of PSquare and they promised to refund the money spent on the show,” the promoter told P.M.NEWS.

According to the promoter, a total of N3.633 million which he borrowed from the bank was spent on the aborted show.

“After several efforts to get the money refunded, I instructed another lawyer, Mr. J.E. Enyia to sue PSquare in court which was done on 22 March , 2011,” he added. The case was filed at the Benin High Court with suit number 3/217/2011.

When the case came up for hearing on 27 June, Mr. Okoye is said to have persuaded the promoter’s lawyer to allow for out of court settlement but has since refused to honour his pledge. The case has been adjourned to 26 October for further hearing. As at now there have been no comments from Mr. Jude Okoye concerning the issue.