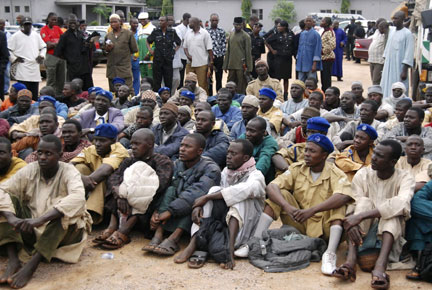 In recent times now our beloved country Nigeria has been bedeviled with a series of bomb blasts. This responsibility for such blasts has been accepted by a sect called boko haram. a variety of suggestions has been given on the best way to go in dealing with this sect and their unclear grudge suffice to say the suggestion for dialogue seems to have won the day in the corridors of power. But the salient point to note is that the tactics of this sect is totally one of bullying and a philosophy of might is right.

They bulldozed their way into public consciousness by the extreme act of violence and criminality which is the taking of human life. It is well known as a fact that giving in to bullies always have the effect of spurring more acts of bullying.

The latest story now is that their leader was killed nd that is what is responsible for their senseless killing but have we asked ourselves how in the first place their leader came to be in the custody where he was killed?  Though I am against extra judicial killing I still think the circumstance which led to the death of their leader was the leader engaging in the highest act of violence so it begs the question is their leader’s life more important than the people their leader killed? If everyone who has lost someone in this their senseless killings take to arms do they really think they will survive the resulting eruption of violence?  About last week they released a list of tertiary institutions they were targetting in furtherance of their hate against western education but I would go as far as to call them Fools because even the guns and bombs usedd by them,the vehicle they use in pperpetuating their evil acts are all products of western education. This shows that we should not be quick to dialogue with people who take lives of their fellow humans for reasons they cant even articulate.

The perfect response to people such as this is giving them a doze of their own medicine. As far as I’m concerned they have declared war against a sovereign state and they should treated as enemies of the state and executed with extreme prejudice when they are caught. Making them pass through the legal process is an insult of the law.

They have no coherent grudge,they have no tangible demand all they have shown so far is a total dedication to taking human lives and it is my fear that others will learn soon that they can rubbish a nation and get away with it and its going to be very disastrous. Lastly I would advice them that no one person has monopoly to violence and every human if pushed has a limit. Their threatening to blow up any tertiary institution in the south is the worse thing they could have done so far because you cant compare people who have been peddling violence for almost fifteen years with those who just started a mere two years at most ago. Nigeria is for all of us and our unity is worth fighting for so I’ll advice this sect to lay down their arms and lets all live peacefully. God bless Nigeria