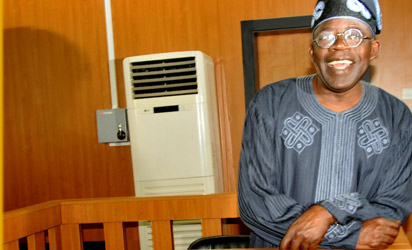 The trial of former Lagos state governor, Asiwaju Bola Tinubu, for illegally operating foreign accounts while in office as governor could not go on Wednesday before the Code of Conduct Tribunal (CCT).

The trial was stalled because a new charge filed against the former governor was served on him in court.
In the new charge, Tinubu was said to have operated various foreign accounts between 1999 and 2007 with the following banks: First Heritage Bank in Illinois, Citibank of New York and HSBC in London.

The offence was said to be contrary to section 7 of the Code of Conduct Bureau and Tribunal Act, Cap C15 LFN, 2004 and punishable under section 23(2) of the same Act.

Some of the accounts he was alleged to have operated were either in his wife’s name or his children’s name.

The last count, which is count 3, reads: “That you Bola Ahmed Tinubu, former governor of Lagos State being a public officer as listed in part 11 of the 5th Schedule to the 1999 Constitution, and having subscribed to the oath of office on assumption of office between 1999-2007 and while in office as such you misinform(ed) Code of Conduct Bureau by stating in the Form CCB1 that you do not have foreign account contrary to section 15(2) of the Code of Conduct Bureau and Tribunal Act.”

When the case was called, he entered the dock but his plea could not be taken before his legal team led by Chief Wole Olanipekun (SAN), asked for time to study the new charge and decide the next line of action.

Olanipekun said his client would need an adjournment to enable him to study the new charge before he could come back to take his plea.