Home Entertainment Tonto Dikeh Talks About Her Parents Reaction To Her Movies And Why...
Facebook
Twitter
WhatsApp 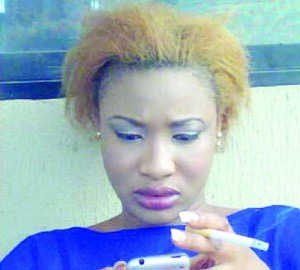 Controversial Nollywood actress Tonto Dikeh reveals more about herself in a recent interview, she explains her parents reaction to her movies and why she cannot stop smoking.
You can view the interview below:

How would you described your career at the moment?

I think it’s really flourishing,it’s doing very well.I am happy about it and with the Damage produced by Uche Jumbo which I featured in,I believe my career has been taken to the next level.

I am really happy for the success.

No doubt,Tonto Dikeh is among the hottest actresses right now,how does it feel?

It feels great but really I don’t see myself from that angle.

I think I can say I am a very broad minded person.I have a good heart.

But the impression out there is that Tonto Dikeh is a controversial actress,what is your reaction to this?

Yes,a lot of people say I am controversial.I can even say that about myself.Tonto is that,Tonto is this,today Tonto is doing this,tomorrow she is doing that.I can say categorically that I am very controversial but why it’s like that is what I do not know.

I think that Africans are not all that exposed to a lot of daring acts and once you do that,you become a very strange person to them.

And before you know it,you have become a topic.It goes on and on like that just because you have deviated from who they think you’re.

Just because you’re doing something different from what others do,they will call you a lot of names,that’s just what I can say about that
You have been perceived as an actress that finds delight in controversial movies to the extent that you,at times kiss endlessly,do you enjoy that kind of role?

What happens is that I love doing my work the way it should be done and I am doing it well.Like I always say,if you take out movie in me being a village girl and you take out of me being a hull,you can’t fault anyone.

I am good at that,I am good at this.It is not just because you see me that way in movies and you think that’s the way I am in real life.

But to some extent,all these roles to some people are indecent,how,do you feel about that?

I think why I can’t see anything wrong about it is because I am an artist but it is easy for you to see the other side of people and judge who is climbing,but left to me,I don’t see any offence in that because it’s a movie and am interpreting a role according to the script.

I am trying to tell a story.So,just like I have told you,I don’t need to be judged by what I do in movies.Anybody,who does that,is just giving him or herself unnecessary headache.

Does that mean your real self is kilometers away from Tonto Dikeh people see on the screen?

Of course,yes,I am free to be a different Tonto in every role I interprete in a movie.But I also believe I have my personality at stake.So,I can’t do anything that will affect my personality.

In most cases,you’re comfortable kissing endlessly in movies,what’s your reaction on that?

To me,that’s very easy.I take things like that for granted.So,far it’s over,it’s over.It doesn’t reflect in my life.Immediately I am through with that kind of role,I leave and start thinking of what next to do.

On June 9,2011,you added another year,we learnt you received a lot of gifts topped by a brand new BMW 6 series given to you by your fiancé?

I am not going to talk on anything like that.Besides,I don’t have a fiancé.

But you have a boyfriend that was actually responsible for that if not fiancé?

Really? I didn’t see any one around.(Laughs)

Some people are saying you and Halima are no longer in good terms,how true is it?

That’s not true.Immediately you came in,I asked you about her.

That tells you that what people are saying does not exist at all.It is only that we are no longer close as we used to be.Anytime we see,we talk and we have drinks.

We don’t have issues at all.It’s just that we have to move on and do something different for ourselves.

How do your parents react to all these movie roles you interprete?

I thank God for the kind of family I am from.They are very understanding,they know its all about my job and nothing else.

Aside acting,if I do something wrong,they still scold me and advice me the right way.They have been very supportive.

Another issue your fans complain about is that you’re a smoker and you have once admitted enjoying it,what’s your reaction?

I appreciate the fact that people are getting worried about that but why? Is it because I am Tonto Dikeh or because they love me and they want me to be in good health? They”re two different things but I don’t care.I care only when you give reasons for talking about me smoking.

I don’t think that should affect you,so far you’re not my brother or my sister.We are not from the same family.

My smoking habit doesn’t affect your life in any way.If I die tomorrow,you’re not going to bury me.My father has the money to bury me.So,why are they talking about it?

Don’t you know some people love you and they want to see more of you as an actress?

That’s what I am saying,it all depends on the motive,any good reason for writing about it or posting it on the internet? I have not seen any reason as far as I am concerned.Period.

May be because of the wide campaign that smokers are liable to die young and they won’t want that kind of a thing to happen to you?

(Cuts in) Even if I am going to die young,I am not their sister.It’s something I know is a bad habit and I think I should stop it.That will be done at the right time.It’s not as if I see it as something I should be proud about,it’s just a terrible habit that I am used to.

I will stop it at my own time,people should just give me a breathing space.