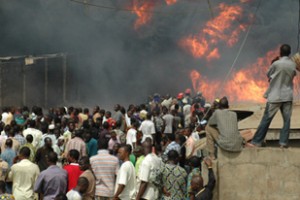 Two bomb blasts were said to have occurred in Jos, the capital of Plateau state. The explosions took place at the West of Mines junction by 8:15pm and although a proper count is yet to be taken, it is anticipated that the bomb attack led to quite a number of casualties.

The explosions in Jos are coming on the heels of several violent deaths in the state capital. There have been recurring incidents of gunmen wiping out entire families. About 3 different families have been wiped out by such attacks, two families of 8 each and then a family of 14, making 30 people, a total of about 52 people are said to have died in just a month, over 200 in 6 months and about 500 since January.

The most recent of such incidents occured just on Saturday when gunmen killed 13 people and a pregnant woman in  Vwang Fwill village in Vwang District of Jos South Local Government Area. The attack occurred at about 11 p.m., in the compound of one Dauda Badung, killing him and his pregnant wife, their five children and two grand children. The gunmen went on to the house of Badung’s  brother where they killed five more people. Two others, including a four-year oldm survived the attack with gunshot and matchet wounds and are now hospitalized.

According to Vanguard, an eyewitness said the attackers spoke Fulfulde (Fulani dialect) throughout the operation, fueling the suspicion that they were Fulani herdsmen.