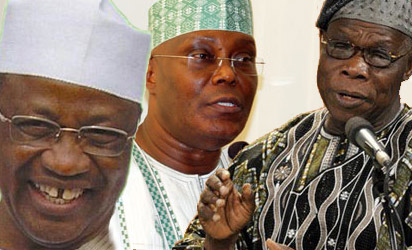 IBB allegedly lured former Vice-President Atiku Abubakar into a political battle with ex-President Olusegun.  According to the United States cable obtained by Wikileaks and downloaded to the internet, while allegedly secretly encouraging Atiku into a political spat with Obasanjo, Babangida was also at the same time allegedly hobnobbing with Obasanjo with the hope of getting his endorsement for the 2007 presidential contest.

The revelations were the outcome of interactions between US Consul-General in Nigeria at that time, Mr. Brian L. Browne and notable political stakeholders in the country in that period.

Classified By: Consul General Brian L. Browne for reasons 1.4(b) and (d).

1. (S) Summary. A long-standing consulate contact said pro-Obasanjo hardliners in the Peoples Democratic Party (PDP) were eagerly waiting information from the FBI they hoped would incriminate Vice-President Atiku. In his political distress, Atiku is reaching out to former head-of-state Ibrahim Babangida (IBB). The contact, who is close to Babangida, said this is the type of situation in which Babangida thrives. Babangida will secretly support Atiku while informing Obasanjo of some of what Atiku is up to —this way hoping to score points with the President. End

2. (S) In a September 1 meeting with the Consul- General, Professor Ukandi Damachi opined the PDP appeared to be moving up its timeline from early next year to right now to dump VP Atiku. He said Obasanjo loyalists believe the FBI’s investigation of Congressman Jefferson will unearth evidence of misconduct by VP Atiku. The rumour circulating among the political elite is that the USG will come down hard on Atiku’s wife, purportedly a U.S. citizen, for tax evasion.

This should be enough to finish Atiku, Damachi smiled.

3. (S) Atiku has been making overtures to former head-of-state Babangida, Damachi’s political boss. Atiku wants to gather anti-Obasanjo allies to form a new political alliance of political heavyweights such as himself and IBB. Of course, IBB’s strategem is not as coarse and is more Machiavellian than Atiku’s. Damachi said IBB will likely give Atiku assurances of support in hopes of enticing Atiku into battling Obasanjo.

Simultaneously, IBB will also keep his lines open to Obasanjo, informing him of some of Atiku’s plans. IBB hopes to keep Obasanjo and Atiku feuding so that they enervate themselves. At the same time, IBB figures he can better position himself in Obasanjo’s future political calculations if he is seen as helping Obasanjo by feeding him information on Atiku. Damachi said IBB would begin to perfect this strategy the weekend of September 2-3 when most of the Northern elite, including Atiku, would be attending a series of weddings in Kano. IBB, Damachi said, would encourage Atiku to start his own party as a way of not allowing Obasanjo to bury him and as a way of remaining in the hunt for 2007.

4. (C) With Atiku under siege, IBB feels he has more room to manoeuver. IBB’s instincts are correct but he overestimates his ability to spin this situation to his liking. Both Atiku and Obasanjo are aware of IBB’s legerdemain and will not be taken by his expressions of support. Thus, while IBB may enjoy the gamesmanship of political intrigue, his vaunted mastery of the craft has actually restricted his ability to act effectively and will unlikely advance his position appreciably. End comment.

5. This cable has been cleared by Embassy Abuja.