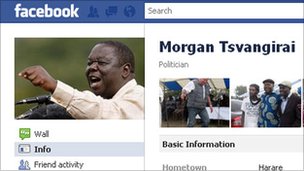 The case against Zimbabwean Vikas Mavhudzi, accused of subversion because of an alleged post on the social media site Facebook, has collapsed.

He spent more than a month in jail before being granted bail on 31 March.

Tensions between Mr Tsvangirai and President Robert Mugabe are rising ahead of elections next year.

The long-time rivals agreed to share power after the economy collapsed following the disputed 2008 poll.

Six other Zimbabweans are on trial for inciting violence after attending a lecture about Egypt’s revolution which toppled veteran leader Hosni Mubarak.

The seminar by a university lecturer asked “what lessons can be learnt” – which the prosecution says means they were planning a similar uprising against President Mugabe, who has been in power since 1980.

The BBC’s Brian Hungwe in the capital, Harare, says Mr Mavhudzi’s case is the first of its kind in the country involving Facebook.

Police arrested him following a tip-off after he allegedly posted the following message to Mr Tsvangirai’s Facebook wall on 13 February:

“I’m overwhelmed don’t know what to say Mr PM. What happened in Egypt is sending shock waves to all dictators around the world. No weapon but unity of purpose. Worth emulating hey.”

Bulawayo magistrate Rose Dube dropped the case after no evidence of the message could be found.