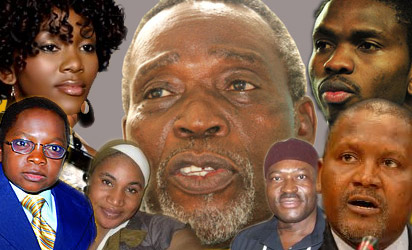 The GCON has mostly been awarded to Vice-Presidents, Chief Justices of the country and Senate Presidents.

Dangote is ahead of Speaker Aminu Tambuwal who is getting a CFR, Commander of the Federal Republic alongside the Attorney General of the Federation, Mohammed Adoke and a number of military and security chiefs. The newly appointed Head of Service of the Federation, Alhaji Isa Sali, former First Lady Mrs. Victoria Gowon and a handful of former military chiefs were also recognized by the President for the CFR award.

A handful of serving and former members of the National Assembly including the Deputy Speaker of the House of Representatives, Chief Emeka Ihedioha, former Senator Joy Emodi, Senator Smart Adeyemi, Senator James Manager, Senator Uche Chukwumerije and Senator Udoma Udo Udoma were all recognized with the Commander of the Order of the Niger, CON.

Nigeria’s first female vice-chancellor, Prof. Grace Alele-Williams is honoured with an Officer of the Federal Republic, OFR alongside a number of Chief Justices of the states including the erstwhile Deputy Speaker of the House of Representatives, Mr. Babangida Nguroje who resigned that position at the peak of the crisis in the House in 2007.

Nollywood artistes were also honoured. Among them are Ginevive Nnaji, Stephanie Okereke, Olu Jacobs and Kanayo O Kanayo who are receiving the Member of the Federal Republic, MFR award.