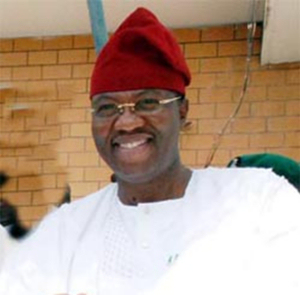 While Alao-Akala was arrested in Ibadan, Daniel was picked up in Lagos. But the arrest of Daniel has a tinge of drama to it as he allegedly escaped from being arrested by the EFCC operatives at his Asoludero Court in Shagamu at midnight. The operatives had invaded Daniel’s residence in Shagamu on Wednesday night but how he landed in Lagos on Thursday morning was  mysterious.

Aware that the game was up, Daniel later put a call, through a proxy, claiming that he was wanted by the EFCC and would like to report himself at the commission’s annex office in Ikoyi, Lagos.

The ex-governor of Ogun State later gave himself up at the EFCC’s office in Lagos. Findings however revealed that Alao-Akala was arrested at his residence in new Bodija Quarters in Ibadan.

Both Alao-Akala and Daniel were being flown to Abuja aboard Arik Air for interrogation as at the time of filling this report. As for ex-Governor Aliyu Akwe Doma, he was arrested at Lafia earlier in the day by some operatives.

All the three governors are wanted in connection with alleged fraud totaling N101 billion. The breakdown is as follows: Daniel (N58b); Alao-Akala (N25b) and Doma (N18b).

A top source in EFCC, who spoke in confidence, said: “These ex-governors will be quizzed alongside some of their ex-commissioners and contractors.

“We have already prepared a list of ex-commissioners and contractors that will appear before our interrogation team,” he added.