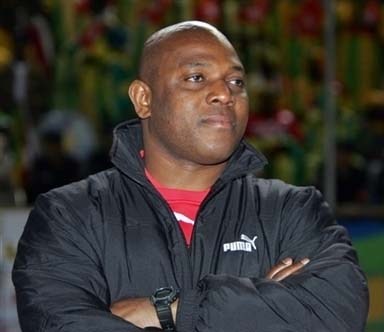 The Technical Committee of the Nigeria Football Federation, NFF, wants Samson Siasia sacked as Eagles coach after he failed to qualify for the 2012 Nations Cup.
MTNFootball.com reported early today that the committee, headed by Chris Green, also recommended that former coach of the Hawks of Togo, ex-international Stephen Keshi be appointed in a caretaker capacity before a competent foreign coach is hired for the country’s international team.
The committee believes that shopping for a foreign coach may take longer than necessary with the Eagles due to play a 2013 Nations Cup qualifier in January.
According to top officials, Siasia has a four-year contract, which clearly stipulated that he qualifies Nigeria to at least the semi-final of the 2012 Africa Cup of Nations for it to remain valid.
Last Saturday, the Eagles failed to reach even the Nations Cup finals for the first time in 25 years. Besides not meeting this target, his managerial and technical skills were also questioned.
“It’s obvious that this man cannot handle this team,” said a top technical committee member in reference to the highly publicised spats Siasia got into with some of the Eagles top stars like Osaze Odemwingie and Vincent Enyeama.
The Aminu Maigari-led executive committee of the NFF is now expected to meet next week to deliberate on these recommendations.