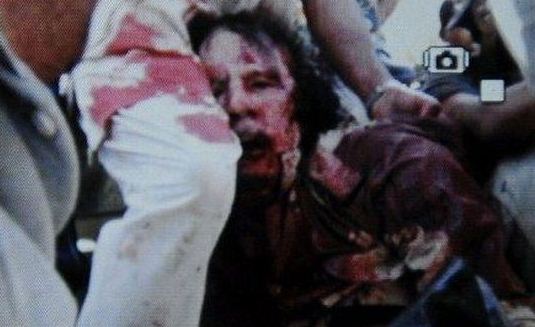 Muammar Gaddafi, erstwhile leader and strong man of Libya has supposedly been captured and is being reported by some news houses to be dead. According to the NTC Information Minister Mahmoud Shammam, all indications are that Gadhafi was killed by NTC forces while he was fleeing a house in his hometown of Sirte.

Commander Mohamed Leith speaking to AFP said “He (Gaddafi) has been captured,” “He is badly wounded, but he is still breathing,” Leith added that he had seen Gaddafi  himself and that he was wearing a khaki uniform and a turban.

The National Transitional Council official Abdel Majid told Reuters that “”He’s captured. He’s wounded in both legs … He’s been taken away by ambulance.” He said this happened as Gaddafi tried to flee in a convoy which NATO warplanes attacked. “He was also hit in his head,” the official said. “There was a lot of firing against his group and he died.”  According to the BBC, the dictator shouted, “Don’t shoot!” as he was mortally wounded.

A pro-Gaddfi television website however insisted the strongman remained at liberty. “The reports peddled by the lackeys of NATO about the capture or death of the brother leader, Muammar Gaddafi, are baseless,” said Al-Libiya television. Gaddafi “is in good health,” it insisted.

So far most reports seem to be based on speculations as no media house has authoritatively confirmed the demise of Libya’s strong man Muammar Gaddafi. The U.S is still checking the claims of Gaddafi’s death and say they are yet to confirm the reports.

The NTC has however taken to the streets with patriotic music and jubilation over the demise of the dictator.