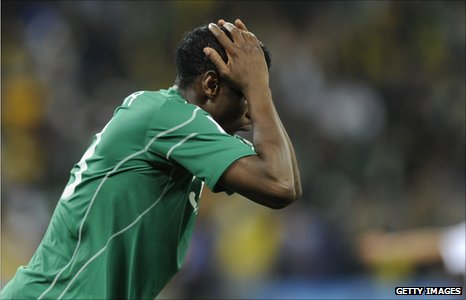 Nigeria are out of the Africa Cup of Nations after being held to a 2-2 draw by Guinea in Abuja.

The Syli Nationale go through as Group B winners.

After Ismael Bangoura gave the visitors a second-half lead, Nigeria seemed to have turned it around with goals from Obinna Nsofor and Ikechukwu Uche.

But Ibrahima Traore’s goal deep into stoppage time ensured Guinea’s progress and meant Nigeria failed to qualify for the first time since 1986.

They will be absent from the competition for the first time since 1996 however, having quit those finals for political reasons.

The Super Eagles went into the match needing to win 1-0, or by two clear goals should Guinea have scored, to book their place in Equatorial Guinea and Gabon.

Nigeria’s plight was not helped when Ethiopia beat Madagascar4-2 in Addis Adaba on Saturday.

With results against the bottom side in the group not being taken into account, Nigeria’s two wins over Madagascar are no longer relevant.

“This was a very big surprise – and I must confess that the team was very nervous – the pressure was just too much,” former Nigeria international Sunday Oliseh told BBC Sport.

“Things have been going wrong for us since 2002 – there’s a lack of consistency, we are not that well-rounded and there are too many lapses.

“Not qualifying for a World Cup is one thing but when we don’t qualify for a Nations Cup, that hurts as it means we don’t belong to the best teams in the continent.”

After the match, a number of Nigerian fans reacted angrily to the defeat – attacking the media tribune at the Abuja National Stadium while also damaging its infrastructure.