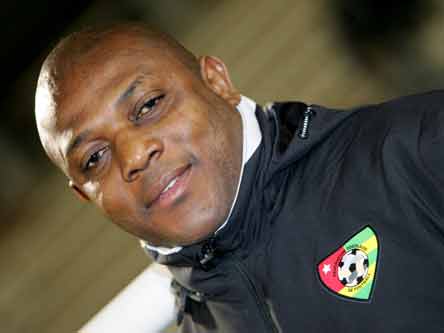 A former coach of the Super Eagles, Shuaibu Amodu has expressed confidence in Stephen Keshi’s ability to meet targets set for him by the NFF.

Keshi has been tasked with qualifying the Super Eagles for the 2013 Africa Cup of Nations and the 2014 World Cup, and Amodu, who exceeded his own targets, says Keshi has the experience to do the same.

“The targets are very clear and I believe they are achievable, knowing he has done it before with two other national teams, Togo and Mali,” Amodu told KickOffNigeria.com.

“Besides he also did it with me, because I can’t take the credit alone. The first time we qualified for the World Cup in Japan/Korea, he was with me and he was a very huge contributor to that success.

“So coming from that background, I think that this man is the right man for the job, and we should all rally round him.

“It is not going to be easy but it is surmountable.”

Nigeria drew 0-0 with Botswana in Keshi’s first game in charge, but the former national coach dismissed the result as immaterial at this time.

“I saw a very relaxed team that tried to express themselves. And that is all what friendlies are about. The fact that they did not win the game is not important. What is important is that the objective of coming together as one family was achieved.

“Secondly I believe that the lack of taking precise shots at goal was obvious.

“But we saw throughout the 90 minutes that it was a one-sided game.

“I think its fair to say that the opposition was a bit lucky.”

Nigeria play Zambia next on Tuesday in Kaduna.