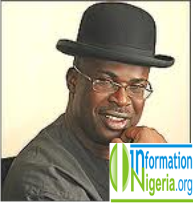 Governor Timipre Sylva of Bayelsa State, Sunday, declared that he was still in the gubernatorial race in spite of the primaries held Saturday and that he was prepared to pursue his course through democratic means. He challenged acting Chairman of Peoples Democratic Party, PDP, Alhaji Abubakar Baraje, to come out with reasons why the party excluded him from its primaries.

The governor’s reaction is coming on the heels of media reports in which Alhaji Baraje was quoted as alleging that the Bayelsa State Governor had been told the reasons he was excluded from the governorship primaries and that such “sins” would be made public in due course.

In a statement issued by his Chief Press Secretary, Doifie Ola, the governor challenged Baraje to come clean on these “sins”, perhaps, for necessary “atonement”.

The statement reads: “For the avoidance of doubt, Sylva says at no time did Baraje discuss the so-called sins with him. We are aware that the PDP national chairman has been giving different ‘reasons’ to different people on the illegal exclusion of the governor. At last, Baraje has exposed the fact that there was no reason known to law and commonsense for the exclusion of the governor.

“With Baraje’s tone of voice, we fear that after having excluded Governor Sylva without any justification, there is now a desperate attempt to cook up reasons, however untenable and tenuous, as an afterthought.

“Governor Sylva feels it is saddening that PDP is descending to this level and believes they are up to something sinister.

“It is illegal and unjust for PDP to exclude the gover-nor from contesting without any cogent reason.”

“Baraje also alleged in the report that Sylva’s case is not the first time a sitting governor would be disqualified by PDP, saying it had happened in the case of the former Anambra State governor, Chinwoke Mbadinuju.

“We wish to refresh the memory of Baraje, if he does not know or has forgotten, that Mabadinuju was never disqualified by PDP. He contested the party primary and was rigged out. But in the case of Bayelsa State, Sylva is not even given the opportunity to compete with whosoever has been ‘anointed’.

“We feel sad that instead of drawing useful lessons from the Anambra debacle, the current leadership of the party, under Baraje, is celebrating it. Not only did PDP lose the state, so many lives were lost and a lot of odium was brought on the party because of power. None of those losses has been recovered till date. We do not wish this to happen in Bayelsa State.”