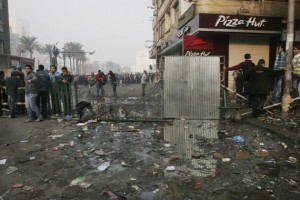 Egypt’s military rulers apologized Thursday for the deaths of dozens of pro-democracy protesters and vowed to prosecute those responsible in its latest attempt to appease the tens of thousands who have taken to the streets demanding that the generals immediately step down.

Police and protesters also agreed to a truce negotiated by Muslim clerics after five days of fierce street battles that have left nearly 40 dead.

But the military’s apology left many of the protesters unmoved.

“What we want to hear is when they’re leaving,” said Khaled Mahmoud, a protester who had a bandage on his nose after being hit by a tear gas canister.

The streets where the battles took place were almost entirely covered by debris, soot, abandoned shoes and scores of the surgical masks used by the protesters to fend off the police’s tear gas.

“The army is like the police: A tool of suppression,” said Mayada Khalaf, a female protester. “Where was the army when the shooting was going on?”

The fighting around Cairo’s central Tahrir Square, which began Saturday, has been the longest spate of uninterrupted violence since the 18-day uprising that toppled longtime authoritarian leaderHosni Mubarak on Feb. 11. It has deepened the country’s economic and security woes ahead of the first parliamentary elections since Mubarak’s regime was toppled. Voting is scheduled to begin on Monday.