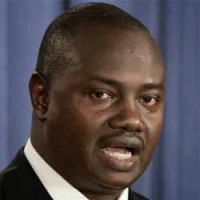 FOR Mrs. Farida Waziri, being the anti-corruption czar is a job that places one on tenterhooks, one is not certain if one would not be consumed by the forces of corruption that one fights against.

She was quite aware of this dilemma, which she captured aptly when she once observed: “If you fight corruption, corruption will fight back with everything it has got.”

And yesterday, her battle against corruption came to an end.  President Goodluck Ebele Azikiwe Jonathan relieved her of her job as the Chairman of the Economic and Financial Crimes Commission (EFCC). She was said to have been informed of her sack by her aide who heard the news when it was broadcast.

In her stead, Jonathan appointed Mr. Ibrahim Lamorde, who until now had been EFCC’s Director of Operations, as Acting Chairman.

This development was contained in an electronic statement by Special Adviser to the President on Media, Dr. Reuben Abati and made available to the media. But the statement did not disclose why Waziri was relieved of her appointment before the expiration of her tenure.

The statement reads: “President Goodluck Ebele Jonathan has approved the appointment of Mr. Ibrahim Lamorde as the Acting Chairman/Chief Executive of the Economic and Financial Crimes Commission (EFCC).

“The appointment takes immediate effect, and effectively relieves Mrs. Farida Waziri of her position as EFCC Chairman. Mrs. Waziri was appointed EFCC Chairman by the late President Umaru Musa Yar’Adua on May 18, 2008 and confirmed by the Senate on May 27, 2008.

“Mr. Lamorde, an officer of the Nigeria Police, was until this appointment the Director of Operations of the EFCC. He was also Acting Chairman of the EFCC before Mrs. Waziri assumed duty at the Commission.”

The appointment of Lamorde marks the end of Waziri’s era, which was not without its own fair share of battles, which culminated in a love-hate relationship between her and the two Attorneys-General of Federation and Justice Ministers – Michael Kaase Aondoakaa (SAN) and Mohammed Bello Adoke (SAN) who she has had to work with at different times during her tenure.

She was a passionate speaker on issues concerning corruption. Her last public outing was last Monday at the National Defence College where she delivered a lecture entitled: “Economic crimes and national security: Challenges for Nigeria.”

In her lecture, she described corruption as the biggest threat to Nigeria’s economy and national security, stating that there was a direct nexus between security and the economy.

Waziri, a retired Assistant Inspector-General of Police (AIG), said for the battle against corruption to succeed, there must be political will on the part of government, effective law enforcement, effective and incorruptible judiciary and an independent, virile civil society.

“First, there must be a political will to fight corruption. When the chips are down, the essence of political leadership is to provide a direction for policies and to provide requisite anti-corruption structures, such as legislation, funding, zero tolerance policies, among others”, she said.

Waziri was in Makurdi, the capital of her state, Benue, yesterday where she was being conferred with an honorary doctorate when she was relieved of her job.

Sources said the decision to remove her was taken long even before the last election. An insider said yesterday: “The first straw was when the State Department and the Justice Department of the United States (U.S.) early this year reportedly wrote to complain about some discoveries of impropriety in the conduct of some senior officials of the anti-graft agency inside the U.S.”

The source recalled a particular case against a popular bank in Nigeria that was reportedly fined $15 million for money laundering when Aondoakaa was Attorney-General of the Federation and Minister of Justice. It was said that the Justice and State Departments were shocked that the bank that committed this heinous crime was not even queried in Nigeria by the Justice Ministry and the EFCC in Nigeria, although the Justice Minister then was notified.

“You would recall that when Mrs. Hillary Clinton came calling the other day in 2009 shortly after the launch of the re-branding initiative, the EFCC was one of the institutions she condemned at the Yar’Adua Centre where she met the civil society people and the media. She said then “EFCC has fallen.” It was learnt yesterday that after that, Waziri’s EFCC was also reported to the Presidency by the same U.S. government on another issue but details were not available at press time”, the same source said yesterday.

But then, it was learnt last night that there were recent specific issues, which persuaded the President to remove her before he jetted out to France yesterday.

The only hint by a Presidency source is that  “there are too many allegations against the agency right from the bank debt crisis to controversial arrests and detention of former governors. But instead of doing her job, the information department has been more resourceful than the operations department of the agency where most police officers now want to serve because it is lucrative to serve there. That is not good for us as a country….”

Also, a government source said last night: “The EFCC has suffered huge reputational injuries on account of Mrs Waziri’s headship of the agency.

This perception problem sparked doubts about the character and capacity of the agency’s leadership.”

The source listed some specifics to include:

•” Shoddy handling of the Ibori case and the failure to

challenge his acquittal by the High Court, Asaba.

•Penchant to arrest before investigating.

who claimed she was being used for certain deals, until the man produced pictures showing her with Farida at a party.

case. Other partners like the UK Serious Fraud Office also

gave the agency a wide berth.

The source added: “It is the loss of credibility that was responsible for the doubts that trailed the recent arraignment of some governors.”

Waziri in the past three years led her team to record over 450 convictions, recovery over $9.5 billion.

Some of the high profile cases she started included:

•Michael Botmang (Former Governor of Plateau State) whose trial commenced  on  July 18 2008. He was arraigned on 31 counts at the  Fed. High Court, Maitama  over N1.5 billion fraud related charges.