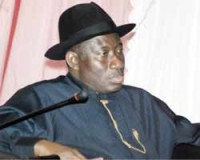 A TOTAL of 354 Nigerians were yesterday presented with the insignia of their national awards with President Goodluck Jonathan appealing to Nigerians to renew their spirit of patriotism and see themselves as stakeholders in the Nigerian project.

Jonathan, who presided over the award ceremony at the International Conference Centre, Abuja, directed the Special Duties Department in charge of the national honours to “take steps to ensure further improvement” so that the honours continue to serve the purpose of recognising individuals who have contributed to the development and projection of their communities, states and country.

According to Jonathan, “one thing I am aware of is that there have been criticisms of the National Award nominations and selection process. I have since directed the appropriate departments to note the concerns that have been expressed and to take steps to ensure further improvement so that the National Honours award can continue to serve its purpose. National Honours are not merely decorative; they remind us of an important part of our responsibilities as citizens. We must always endeavour to do the best for our country even as we realize with deep humility that all human beings are fallible, we must look forward with confidence and hope that our country through each and every one of us can indeed put its God given endowment to the best possible use. Let me re-emphasize again, how some of the people are selected because there are comments from very young people who are a bit confused about how people are selected for National Honours.”

“The traditional birth attendant that probably works in an area where there is no doctor and successfully delivers hundreds of babies can be awarded and recognized by the president. So is a sports man who is illiterate, but a good footballer, wrestler or a boxer and projects the image of this country globally and wins laurels and brings us to limelight, could be recognised in these honours series. Also in the case of the military, an officer, a corporal or even a private soldier could be given a medal that probably a colonel or general might not have for show of gallantry, and that guided the National Honours.”

The President rose in defence of the choice of awardees, saying that “the position you occupy does not give an automatic award except for some positions like the GCFR which is given to anybody who becomes the President of this country or the GCON given to anybody who becomes the vice president or the head of the National Assembly or the head of the Judiciary. These are given by virtue of their positions, but others are given by virtue of what you have contributed to the society not necessarily because of the office you hold.

“So, you can also see that some of our traditional rulers are being honoured by virtue of their hard work. For you to be recognised and honoured we will want to see what you have used that position to achieve for us. Do you use that office to destroy us or do you use it for the development of your domain? So also is a youth leader, a woman leader or an elder — do you use that position to bring development and peace to your people at your community level, local council level, state level and the national level or you have used it to bring crisis or destruction to our people? These are what guide the selection of this award and that is why you see a mixed group of people being recognized.

“You can see today that we have recognised Aliko Dangote with the highest award on the GCON series because we must recognise enterprise. This is a man who has been able to employ thousands of Nigerians as we heard it from the citation. Today, I am having the GCFR, the highest in the land, by virtue of the fact that I am the President of this country, but if I am not the president another person must be the President of Nigeria. But if Aliko did not have that business acumen to build that empire probably we wouldn’t have had somebody to employ thousands of Nigerians. So, those who by their innate abilities and creative energies have been able to make impact in our society even deserve more honour than those of us holding political offices. So, we would continue to encourage enterprise, creativity and Nigerians who have excelled in whatever form. A welder, electrician or anybody who by virtue of what you do, you’ve done it with much dedication and impacted society significantly can be honoured by the president.”

Dangote, who spoke on behalf of the awardees, said that “we are actually out of words. We don’t know what to say. We are very happy. This recognition will not go away like that. It is a challenge for all of us to be good ambassadors of Nigeria both at home and abroad. Yes, in Nigeria, we have security challenges. But there is no country without security challenges.”