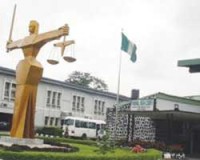 THEY are the epicentre of “the temple of justice” and as such conjure up a solemn, pristine grandeur in the mind. They really are, in saner climes that is, hallow precincts – unsoiled, pure, spotless, immaculate, as if designed to force the presence of the Divine on anyone who steps into them.

But then take a trip to one near your home or office in this country, what do you get? Safe for some newly built, you could tick off your fingers in one or two states and the Federal Capital Territory (FCT) for obvious reasons, you would be forgiven if you pass all courtrooms across the length and breadth of Nigeria as mere wastelands.        .

To be sure, the ugly phenomenon has defied several panels set up to tackle it by successive administration and several stakeholders were unequivocal in their submission to The Guardian that the current state of decay across courtrooms in Nigeria is one cogent reason for the delay in the very aim of their establishment – quick dispensation of justice.

To the stakeholders, the inhospitable environment of the Nigerian courtroom has created a culture of endless case adjournment or several forced stand down of legal matters, straining litigants and their Lordships for nobody’s good.

But while some blamed the situation on purported under-funding of the Judiciary, others alleged that funds voted for courtroom repairs and renovation often get sucked into cavernous black-hole private pockets of corrupt officials in charge of such duties.

The situation is at its nadir in the Magistrate’s courts, superior courts of record or the first line of litigation in most legal matters and the oldest court level in the country, which are in truth pitiable relics of colonialism across the country.

A visit to  the High Court building at Race Course, Lagos, then headquarters of the Courts in the country,  the oldest and most recognisable judicial building in Nigeria tell the sorry state of the court rooms in Nigeria.

Even the Supreme Court building commissioned by Nigeria’s first President, the late Dr. Nnamdi Azikiwe, in 1963, which currently houses the Appeal Court, Lagos Division, has become an eyesore to all visitors, litigants and lawyers alike.

Besides the small size of some these courtrooms, ventilation is very poor in them. Even when there is power, the cooling systems and other electrical gadgets are often out of service. In some cases, the roofs are leaky, with no cabinet for registrars to keep court files.

In Magistrate’s and Customary courts, court sessions are often conducted in hot, metal containers, with no cooling systems whatsoever.

With a large number of lawyers and other litigants storming the courtroom to participate or watch the proceedings, the small courtroom, which can barely take 15 people became overcrowded and stuffy.

Eminent lawyer and elder statesman, Dr. Tunji Braithwaite, who was counsel to the plaintiffs, protested the poor state of the courtroom, describing it as “unsuitable for proper proceedings.”

The trial Judge, Mohammed Idris, could not agree more with Braithwaite. Consequently, he adjourned the matter yet again, that was after the suit had suffered several adjournments.

In Ibadan, Oyo State the same sad story is obtainable. The Oyo State High Court building, commissioned on May 24, 1985 by the then military administrator, Lt.-Col. Oladayo Popoola, is currently a dilapidated structure. Its courtrooms are in a state of disrepair and unfit for use. Judges are often forced to adjourn cases before them anytime after 11.00 a.m. due to the heat and un-conducive work environment.
The situation is not different in Cross River, Rivers, Delta, Plateau, Enugu, Akwa Ibom, Kaduna, Imo, Abia, Edo and other states as the condition of the courts are worrisome.

Although, the State High Courts located at Mary Slessor Avenue in Calabar, Cross River State, have modern structures, there are no enough seats to take 50 persons in one courtroom.

The air conditioners and fans are not functional and there is no public address system not to talk of verbatim recording equipment to record proceedings.

In most cases, litigants and lawyers have to strain their ears to hear the judges and vice versa while judges are forced to write in longhand. Lawyers have to wait for their Lordships to record their arguments repeated several times in most cases, thus prolonging real time of litigation.

In Benue State, investigation by The Guardian showed that most court-rooms are too tiny and without modern facilities to enhance speedy dispensation of justice.