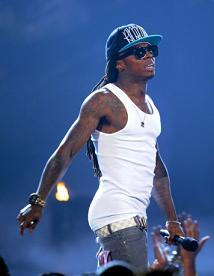 Hip hop lovers especially Young Money rapper, Lil’ Wayne’s fans in Johannesburg, South Africa are in for a treat as emerging reports have it that the rap star will perform an extra night in the city during his ‘I Am Still Music Tour’.  Initially billed to perform in the country’s three major cities – Cape Town’s Bellville Velodrome on December 7, Johannesburg’s Coca-Cola Dome on December 9 and Durban’s Wavehouse on December 11 – the star will be performing an extra night in Johannesburg on December 10.  This was as a result of an unprecedented demand for tickets after Maybach Music boss and rapper Rick Ross announced he will be joining the tour.  The promoters for the event, Canoc Productions also announced a surprise performance by an un-disclosed musical artist.  Lil Wayne will be joined on stage by fellow label acts like Corey Gunz, Gudda Gudda, Mack Maine, Shannel, T-Streets and Jae Millz.  Wayne 28, is a Grammy Award-winning rapper signed to Cash Money Records. His most successful album, ‘Tha Carter III’, was released in 2008 and sold over 1 million copies in the U.S. in its first week of release.