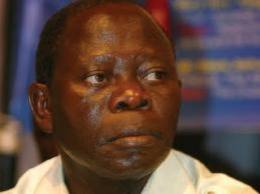 EDO State governor, Comrade Adams Oshiomhole, Sunday, in Benin denied spending the sum of N3billion to host the international friendly match between the Super Eagles of Nigeria and their Botswana counterpart and other activities marking his Third year anniversary in office. Speaking at the thanksgiving service as a part of the activities marking the three year anniversary of his administration at St.Paul Catholic Church Benin, the governor said that all what the footballers and artists did was to solidariize with the government and to commemorate with him the third year anniversary of his government and not for monetary terms. Oshiomole said that the people will continue to see more of what his administration had for the State and his best in spite of all challenges faced by the government According to him, “whatever that has being achieved; we still need more support and prayers from the people in order to deliver the greatest goals within shortest possible time”. Former governor of the state, Chief John Oyegun speaking at the occasion, said, “every man has a purpose and Oshiomhole’s purpose is to transform the state infrastructurally, but then he need to focus more on building a foundation, a formidable foundation” even as he described his three years in office as 3year of progress and transformation. He called on Edo people to always remember the governor in their prayers to God to continue to give him the courage and good health to do more, saying that there was a lot more to be done. Meanwhile the member representing Oredo Federal Constituency in the House of Representatives, Mr. Razaq Bello – Osagie said that the three years of the Oshiomhole administration has been full of achievements. He described the governor as a generational gift to the state, and a man of vision and strength who was committed to uplifting the life of the people.