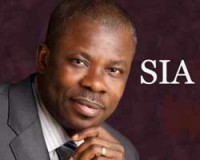 At the end of the operation which, according to eye-witness, went on without any hindrance, 12 people lay dead from the bullets of the robbers who were said to be about 20 in number.

The Guardian gathered that the robbers arrived the scene of the incident around 11:00a.m. and immediately started shooting sporadically into the air, apparently to scare people away. They were said to have later gained access to the vaults of the four banks and succeeded in carting away yet to be ascertained amount of money.

But the robbers did not go unchallenged as an eye-witness told The Guardian that the vigilance group in the town engaged them in a gun duel for over 15 minutes but in the process, the driver of the vigilance group was said to have been shot dead by the bandits.

Among the dead was an Hausa man, a yet to be identified motorcyclist, a man said to be eating at a nearby food canteen. One of the leaders of the vigilance group, Mr. Musbau Araokanmi  and another man simply identified as Letua, were shot and badly wounded. They have been hospitalised.

An eye-witness told The Guardian that the robbers who carried sophisticated weapons  escaped through Iperu-Ago-Iwoye road, passing through OOU mini campus  road and causing serious panic.

All efforts between 3pm and 4.45pm to get the Ogun State Police Command spokesman, Mr. Muyiwa Adejobi’s reaction proved abortive. Repeated phone calls to him between the said period were not answered.

In a related development, Governor Chibuike Amaechi of Rivers State said yesterday that security operatives were on the trail of a notorious female robber and one of her cohorts  responsible for killing over 15 policemen.

Amaechi said government had already heightened its fight against criminals in the state capital, Port Harcourt and its environs with the killing of some of the gang members on Monday.

Some of the  robbers who are said to hail from the State  specialise in robbing  banks, customers leaving or going into bank premises and some big business centres in Port Harcourt.  .

Said Amaechi: “When we found out that some of those who were robbing were actually from Rivers State, they didn’t know that we had started preparing for them and as soon as they entered the GRA, the police cornered them and there was a shootout. Two died, two escaped and we are looking for them. Inside their vehicles we recovered ammunition, explosives, AK47s and pistols.  .

“One of the women who escaped was one of those who pulled the trigger on a policeman at Rukpokwu when the same gang attempted to rob a bullion van conveying cash for a bank. The security agencies are on their trail and by the grace of God, we are going to get them. Government will hunt them down.”