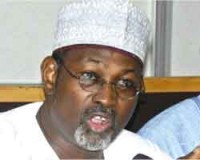 CHAIRMAN of the Independent National Electoral Commission (INEC), Prof Attahiru Jega, who had relocated to Kogi State in preparation for today’s governorship election, with some of the commission’s principal staff, has expressed satisfaction with measures, especially regarding security, put in place for the polls.

Jega spoke with journalists at the state secretariat of the commission yesterday shortly after attending the stakeholders meeting on arrival.

What is the INEC doing to stop the use of some council offices as collation centre?

Our hope is that we must be independent and neutral and as such, this year we are building 75 new offices across the country, just to be able to move away from council offices. Our hope is that next year, we would build more.

But some things are happening that are undermining these efforts. For example, in Bauchi State, some of our offices were razed during the post-election violence.

What are you doing about claims that some politicians are stockpiling arms and that military and police uniforms are being sown for thugs to disguise as security operatives to unleash terror during today’s polls?

We have not seen any evidence to ascertain the veracity of such claims, but as an organisation, we cannot fold our arms. That is why we have deployed security massively to protect the electorate.

Our target is that every polling station will be manned by at least two policemen. There will also be roadblocks and the army will be on hand. In fact, all security measures have been taken.

Have you identified areas where rigging and electoral violence may occur ?

We know the hotspots and black spots and we are planning on how to address all these areas.

Electoral materials did not get to some polling units early enough during the April election, are there arrangements to ensure that such does not happen this time around?

Learning from the experience of the past, what we did in April was to decentralise the movement of materials and that was how we were able to minimise the delay.

The election in Kogi will be better than the April election. Though there are challenges, but with the measures put in place, we will bring such challenges to insignificant proportion.

If there were problems that happened in April that were technical in nature, we have put in place adequate measures to ensure that such issues do not come up again.

We have prosecuted over 200 electoral offenders this year, which has never happened before in Nigeria. It is only that the numbers of offenders are too many and we need to investigate, get lawyers and all that before we can prosecute.

There were 870 cases of electoral offences, but we have prosecuted only 200. That is why we are talking about establishing a body to prosecute electoral offenders as suggested by Justice Muhammadu Uwais.

You expressed apprehension over Kogi election during a radio interview recently, what were those things that made you express such concern?

It is true that I expressed apprehension, but that was about six weeks ago. Where there are issues of ballot snatching, attack on our staff and all such irregularities, there is need to see how to stop such and I said we are engaging security operatives.