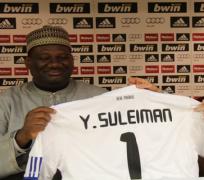 President Goodluck Ebele Jonathan has relieved the Minister of Sports, Alhaji Yusuf Suleiman of his post with immediate effect.

A statement from Presidential Spokesman Reuben Abati said his removal was done “to afford him the opportunity to focus fully on the pursuit of his declared political ambition.”

Suleiman on Wednesday declared his intention to contest the Governorship race in Sokoto State on the Peoples Democratic Party (PDP) platform. He is challenging the incumbent PDP governor of the state, Alhaji Aliyu Wammakko.

“President Jonathan thanks Alhaji Suleiman for his services to the nation and wishes him success in his future endeavours,” the statement added.