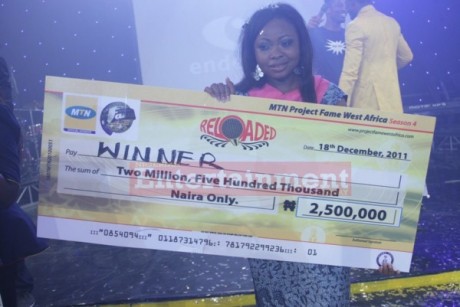 Monica has emerged winner of MTN Project Fame 2011, the 4th edition of the popular TV show.
Monica aged 22, spent 10 weeks in the house with the other contestants and beat five other finalists in the grand finale.
The other five other finalists were Roy who was the first runner up, Ese the 2nd runner up, Ethel the third runner up. Yvonne and Ruth.
The overjoyed Monica won the star prize of 2.5 Million Niara, a Toyota Rav 4 SUV and a multi million naira recording contract.
Congratulations to Monica and the other winners.