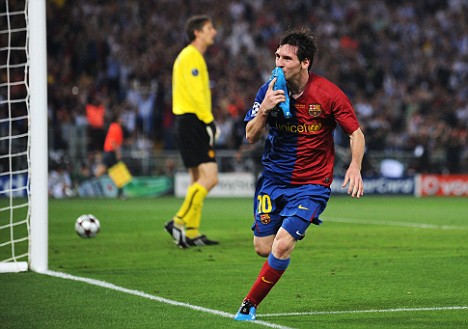 Lionel Messi won the Ballon D’Or award in Zurich during last week making it his third successive win, cementing his status as the best footballer of his generation and indeed one of the greatest of all time.

Only three other players have achieved this feat and Michel Platini is the only one out of this lot to have one it three times in a row.

Many of his fans and even his critics agree that this won’t be his last Ballon D’Or triumph, Messi is only 24.

Sportswear maker Adidas has designed a masterpiece of a boot in honour of his magnificent achievement.

The white and gold Adidas adizero F50 boots have their traditional adidas logo embossed with three golden balls, each with the year he won the prized award (2009, 2010, 2011), and will be worn by Messi only for today’s clash with Real Betis, before he debuts the brand’s new MiCoach range from next week on.

Messi can definately play football wearing anything that fits, be it Gold, Silver or Bronze boots (or even bare foot you may add) and still be un-stoppable on the pitch.