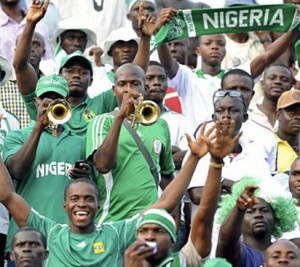 The friendly match between Nigeria and Angola, which held in Abuja today ended in a goalless draw.

The Super Eagles, made up of locally based players, featured a squad in which many of the players earned their first international caps.

Even though the match was not televised and the game was held in an empty stadium due to nationwide protests arising from the government’s removal of subsidy on petrol, Stephen Keshi’s lads gave a good account of themselves.

Nigeria started well with strikers Ejike Uzoenyi, Kabiru Umar and Sunday Mbah being a handful for the Angolans.

Uzoenyi had a good game and came close to scoring.

Heartland midfielder Ikechukwu ‘Mosquito’ Ibenegbu, who came on as a second half substitute also looked useful.

Papa Idris and Azubuike Egwueke were solid in the Nigeria defence comfortably dealing with the Angolan strikers.

Chigozie Agbim, the Nigeria keeper, made a great save from a free-kick early in the second half to deny the Angolans.

The home side continued to play well creating chances but poor finishing let them down.