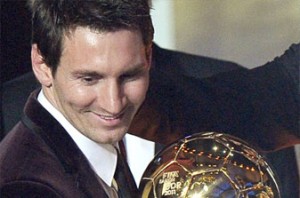 Footballs most prestigious award night is here again and as has been the norm this past few years, is between two short Barcelona players and a tall Madrid Prima-donna.
The Men’s footballer of the year award is going to be a short and do I dare say easy contest between Lionel Messi and Christiano Ronaldo, as you can see I said contest between and omitted Xavi Hernandez’s name not because I forgot, trust me I didn’t, but because today’s voters will not take this phenomenal(no only one player has been a phenomenon, so I’ll say), mecurial mid-fielder serious, when it comes to another Messi-Ronaldo rivalry, even seasoned coaches and journalists tend to relegate everything else plus  Xavi to the background.
Lionel Messi Lujan born in 87′.
The diminutive Argentine forward is in my opinion by far the greatest player of his generation and some say a contender for the greatest of all time, he has the pace of a tiger(instills fear in its prey), the control of a maradona, anticipates and plays a pass like Pirlo,makes the game look so easy like Zidane, as powerful with the ball as Pele,scores and assist like Lionel Messi and lastly, as techniqally unpredictable as Riquelme.
Using FiFA’s criteria to list his accomplishments (after using mine already), Messi scored a whooping 53 goals in all competitions,he was the top goal scorer in the Champions League for the 3rd consecutive season matching Gerd Muller’s reccord and also Van(thief) Nisterooy’s 13goal reccord. Funny enough Messi is already joint top goal scorer this season in Europe’s premier competition.
He has won the FIFA and Ballon’d’or gong twice in a row and is going hard for the third one thereby matching Ronaldo (the real phenomenon) and Zidane’s record for amount of times a single player has picked up the gong.

Christiano Ronaldo also known as CR7 now CR9 (shows you how this dude like puff daddy) loves the spotlight. He is un-arguably one of the greatest of this generation.
He has broken almost every league goal scoring record at every league he has played scoring a whooping 53 goals last season with 42 goals in the league alone thereby setting the pace for others to follow in La liga. He has the pace of an Usain bolt (runs like a one dimensional walcott atimes),the physical and shot power of a Batistuta (prone to diving atimes), the football intelligence of a lampard, a knack for goals as an in-form Inzaghi,the athleticsism of a Christiano Ronaldo , the “prima donnes” of a Balotelli (why always me!) And lastly flops at the big stages like a Thierry Henry (henry fans shut up and accept!!)
As for his FIFA stats he notched 53goals last season and already top scoring this season in the league(including a lot of penalties like Ibra), he also won the Copa del roy which Mourinho called a “very little trophy” and is obviously the main challenger to dethrone Messi.
P.S the dude has said he and Mourinho who is also up for best coach are not attending the event. “Unsporting” cowards(also in my opinion)
Xavi Hernandez, hmmm this mid-field maestro has been as underrated as Riquelme but his array of skills and range of passing has won both Barca and Spain numerous crucial games and titles, he is undoubtedly the engine room of both teams. He is a player like pirlo who plays behind the scenes,has the vision of Dennis Berkamp mixed with Zidane’s creativity and half of Juninho Perlumbu(whatever) freekick skills and also Maldini’s(by the way,meeting him is still on my bucket list) humility which makes him one of the greatest mid-fielders of all time.
May the best man win.

There are also other awards such as women’s footballer of the year, best coach and best goal. I chose to omit expanding on them for obvious reasons.