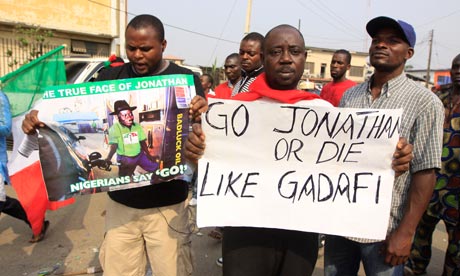 Labour has suspended the strikes over the the removal of fuel subsidy for two days. Leaders of NLC,TUC and JAF announced this in a joint statement. Read the statement below:

The Nigeria Labour Congress (NLC), Trade Union Congress (TUC) and Joint Action Front (JAF) commend the Nigerian people for turning out in their millions since Monday January 9, 2012, to protest the astronomical increase in the price of PMS (Petrol). We commend them for their resolute stand and insistence in struggling for a better country.

The Labour Movement and its civil society allies after nationwide consultations has decided that this weekend, Saturday 14th and Sunday 15th January, 2012, will be observed as strike, protest and rally-free days.
We ask Nigerians to utilize these days to rest, restock and get re-energized for the continuation of the strikes, rallies and protests from Monday 16th January, 2012.

Discussions with Government
The NLC, TUC and their allies in the Civil Society Movement on Thursday 12th January 2012 met with the Senate leadership, Nigeria Governors Forum and the Executive Arm.

At the meeting, Labour asked the Presidency to suspend the new petrol (PMS) price increases announced on January 1, 2012. In return, we offered to suspend forthwith, the strikes, mass rallies and street protests. We also suggested that an expanded committee be set up which would discuss the fuel subsidy issue and pricing for petrol.

The Government side presented a counter proposal asking Labour to negotiate new fuel prices. Since we had no such mandate, Labour declined and decided to return to its National Executive Council meetings, which will be held on Saturday 14th January 2012 for a possible expanded mandate.
Labour commends the National Assembly for its intervention and further urges the Presidency to be more reconciliatory towards the people and show more understanding and sensitivity to their feelings and collective interests.