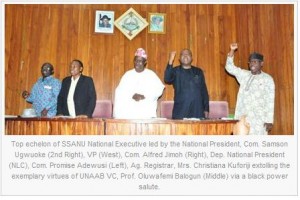 The Senior Staff Association of Nigerian Universities (SSANU) on Wednesday said it would embark on an indefinite strike over the non- implementation of its 2009 agreement with the Federal Government.

Mr Alfred Jimoh, the National Vice President, West Zone, told news men in Ibadan that the main reason for the strike was to press home SSANU’s demand for the 65 years retirement age.

He said the national executive of the association at the end of its 40th quarterly meeting in Ado-Ekiti resolved to commence the strike.

“SSANU was to embark on an indefinite strike on about two occasions; but due to the appeal made by the Federal Government, we decided to sheath our sword.

“As at today, only the salary aspect of the agreement has been partially implemented.

“The government, however, promised to implement all agreements, including the retirement age by the 29th of February.

“Nothing has been done and it will interest you that today is 29th and no agreement has been signed by the government.

“SSANU is not happy about this; we have shown enough understanding with government and it is really affecting our members negatively.

“So any moment from 12 mid-night, we will give directives to our members to embark on strike,’’ he said.