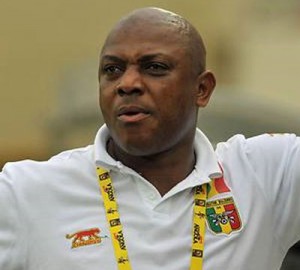 Super Eagles head coach, Stephen Keshi has said he does not want to be compared with his Zambian counterpart, Herve Renard. Renard on Sunday led the Chipolopolo of Zambia to their first Africa Cup of Nations title, and Keshi does want to be put in direct comparison with the Frenchman or his achievement.

“No, I’m Stephen Keshi, I’m no Herve Renard,” began Keshi in an interview with SuperSport on Tuesday.

“Zambia’s achievement is big and I must say it comes on the back of a lot of planning and hard work by that country as well as patience from their fans.

“That (Zambian) team have been together for about three to four years. We are in the process of building here (in Nigeria) and it will be out of place to start comparing myself or this team to Zambia or their coach.”

Keshi, 50, also pointed out that Nigeria have a penchant of producing talents which has led to having a huge base of players in Europe and other parts of the world.

He added that the Zambians, unlike Nigeria, relied on their best men on the continent to win their first African title against all odds.

“For Nigeria, it’s a different ball game because you have a large pool of players to pick from within and outside of the country. The 1994 team, which I was part of, became a hit because it was built over a period of four to five years. Honestly, we can no longer succeed through shortcuts, as we need a long-term plan to build a formidable team for this nation.

“When you compare the number of players abroad between Nigeria and Zambia you will realise the huge disparity between both. Zambia decided to stick to a plan by bringing together their best players on the continent and it paid off in the long run.”