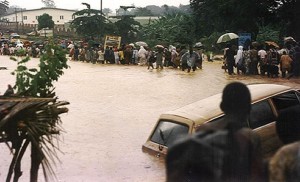 As the impacts of global change in climatic conditions continues to reverberate in the forms of rising temperatures and sea levels, leaving behind its trail disasters in the forms of floods, desertification and other environmental degradation, Nigerians are becoming more aware of the realities caused by global warming. Lagos state has seen greater rainfall and on 13th February experienced very heavy wind which caused lots of damage to public and private property. Severe drought is being felt in Kaduna state and other parts of Africa plus the evacuation of the Kiribati Island is now eminent.

Europe continues to battle a deep freeze that has killed hundreds of people, with transport and navigation services badly hit across the continent cutting off tens of thousands of people. Thick ice has closed hundreds of kilometres of the Danube river in half-a-dozen countries and confined scores of ships to port on the busiest European waterway.  The 2,860km-river, which flows through nine countries and is vital for transport, power, irrigation, industry and fishing, was wholly or partially blocked from Austria to its mouth on the Black sea.

Britain is also expecting heavy snow, up to eight centimetres, while flooding in Greece has left dozens of homes under water after the Evros River burst its banks. Meanwhile, Italy braced for another wave of freezing weather, even as soldiers worked to free villages trapped in three metres of snow and with the death toll from the cold snap already at 43. Local authorities in Rome have begun distributing 4,000 spades for local residents. They have boosted the city’s stocks of salt to 1,000 tons and have dozens of snow ploughs at the ready.

From Jekwu Ikeme’s article on the subject, the social implication of climate change for Nigeria is multidimensional. In the first instance, projections suggest that Nigeria will experience massive “environmental refugee” migration. For a 1-m rise, more than 3 million people are at risk, based on the present population. The estimated number of people that would be displaced ranges from 740,000 for a 0.2-m rise to 3.7 million for a 1-m rise and 10 million for a 2-m rise (Awosika et al., 1992). The most vulnerable is the coastal region of the country. A large percentage of Nigeria’s urban population live in coastal cities. Estimates put the total population living along the coastal zone to about 20 million people which translates into 22.6% of the national population. Similarly, most of the economic activities that form the backbone of the national economies are located within the coastal zone. Coastal areas also form the food basket of the region. Offshore and inshore areas, as well as estuaries and lagoons, support industrial fisheries accounting for more than 75% of fishery landings in the region. This naturally dovetails into the second social implication of climate change which is that of its effect on food security. As populations are displaced and climatic and vegetational belts migrate away from the traditional geographical location, a general disruption in food production is expected to be the outcome.

Environmentally, Nigeria’s climatic regime stands to be severely disrupted leaving its forests and water resources at risk.. Studies show that biological productivity in Nigeria will decrease in the event of global warming (Adesina and Adejuwom, 1994) with an additional consequence of severe fuelwood shortages. Already Nigeria has experienced definite shift in the long-term rainfall mean towards more arid conditions. These climatic changes have had adverse implications for water resources availability for power generation and agriculture. Likewise, Nigeria’s low-lying lagoonal coasts stand threatened by sea-level rise, particularly because most of its major and rapidly expanding cities are on the coast. If sea level rises, inundation could occur along more than 70% of the Nigerian coastline, placing land at risk many kilometres inland (Awosika et al., 1992). In Nigeria, inundation is the primary threat for at least 96% of the land at risk (Awosika et al., 1992; French et al., 1995). With a 1-m rise in sea level, up to 600 km2 of land would be at risk. This area includes parts of Lagos and other smaller towns along the coast. The periodic overflow of the Atlantic across the Bar beach bank is an indication of a phenomenon that may accelerate as climate change intensifies and the seal level rise even further.

In Nigeria today, some state governments in collaboration with the Federal government have begun taking steps to mitigate the effects of global warming in Nigeria, however it is my opinion that members of the public need to be more aware of this problem and start finding solutions within ourselves. The government needs to largely educate Nigerians on what we are to expect in the coming months and how best to safeguard our lives and properties.