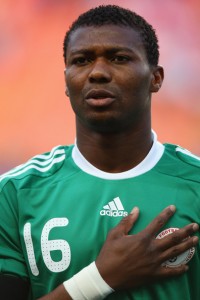 Super Eagles midfielder, Kalu Uche on Tuesday returned to his former Switzerland club Xamax to iron out the issue of his unpaid wages by the club.

Xamax had their license withdrawn and ejected from the Swiss league over fraudulent bank documents, and Uche subsequently joined Spanish side Espanyol.

Uche, who moved to Spanish Primera Liga side, Espanyol last month was given permission by his new club to travel to Switzerland to sort out the issue.

He returned to Barcelona yesterday morning and is available for his home debut against Real Zaragosa this weekend.

“I did my best for Xamax but got nothing in return. I am still being owed 3 months wages but it is okay. I thank God for my move.”

Uche has taken little time to hit his stride in Spain, claiming an assist in Saturday’s 3-3 draw at Espanyol and said familiarity with the league and the fear of a repeat experience prompted his choice.
“I feel very good coming to Spain and to Espanyol.

“I had offers from other places but I chose to come to back to Spain because I’m familiar with the league and also I didn’t want to have the experience I had at Xamax.

And as to whether or not he’ll be pushing to get his unpaid wages, the midfielder says he just wants to focus on football.